There has been quite an uproar in Zimbabwe since the announcement by the Reserve Bank that their authority would begin to issue instruments of payments called “bond coins” from early December in an effort to satisfy the demand for small change. You know when your endeavors are well & truly unsuccessful in trying to re-circulate a type of national coin when even a beggar in the street says “no thanks” to said coins when offered! Well, that’s just what apparently happened recently in Harare, the capital of Zimbabwe, when a journalist tried to off-load a handful of the newly minted but apparently worthless coins to a panhandler. 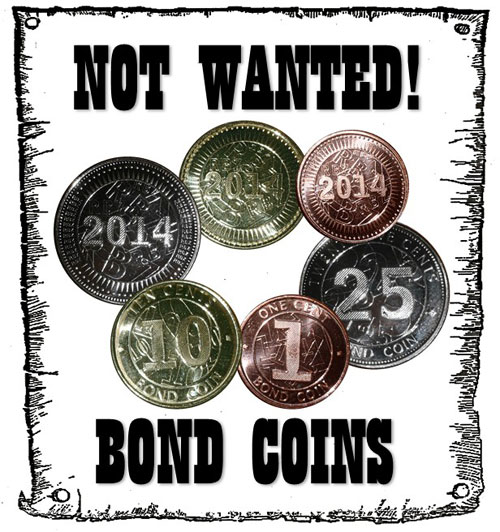 The story all began when the beleaguered economy adopted the US Dollar as legal tender in 2008 as their own Dollar collapsed under inflationary conditions which were said to have reached levels of 500 billion percent – well before the country’s central Bank no longer bothered to keep count. Since then, several currencies have taken root in the Southern African country, single-handedly ruled by the corrupt and dictatorial president, Robert Mugabe, in power since the country attained independence in 1980. Aside from the US Dollar, the South African Rand, the Euro, the Botswanan Pula, even the Japanese yen have all been circulating freely.

However, there can be some complications when one country adopts another country’s currency, and that’s the problem of what to do when there is a shortage of coins to meet the demand of commerce and cash transactions – as Zimbabwe was facing. An agreement by the Reserve Bank with the Federal Reserve to import sufficient coins last year fell through due to restrictions and sanctions against the Mugabe regime so, a solution had to be found. The practice of giving out small priced candies, cigarettes, pens and other trinkets as change for purchases not rounded up or down to the nearest dollar was in place but, in Zimbabwe, even 10 or 20 cents can reflect a lot of money to someone earning less than five dollars a day.

The solution was for the Reserve Bank’s president to introduce and unveil the “bond coin”, a scheme which included a bond floated to guarantee the value of these coins, the value of which was disclosed to be worth 50 Million US Dollars. The coins, without actual country name, rather just with subtle initials of RBZ in the background of the prominently placed year date – are produced by the South African Mint were announced to have values of 1, 5, 10, 25 and 50 cents with the 50 cent coin being introduced into circulation in the middle part of 2015. To date, the overall populace of Zimbabweans have shunned these coins since their official release into circulation last month.

With fears that the government is seeking to “introduce” the Zimbabwean Dollar into the economy by way of these coins, the acceptance of these coins has been anything but a success. So reluctant are Zimbabweans willing to accept these coins that when a journalist from Reuters recently attempted to give a handful of these coins to a traffic stop beggar, he actually refused them with laughter heard from passers-by and a reply of “no thanks” from the beggar himself who moved onto the next car hoping for a better outcome.

The Reserve Bank Governor Mangudya confirmed to the state-owned Herald newspaper last week that only 2 million 500 thousand Dollars’ worth of the Bond coins were in currently in circulation out of the 10 million Dollars that had so far been imported. He cited the low circulation of the coins was due to commercial banks not placing larger orders from the central bank for the coins.

The suggestion made by this author last month before their introduction that the only value the new Bond coins would have to Zimbabweans would be on auction sites and sold in sets to interested collectors. I’m pleased to say that at least one prospective entrepreneur has taken up the task and placed several sets up for sale on a leading online auction site. Those of us who write about coins on a regular basis always like to emphasize that ALL coins have some value – and in in the case of the new Bond coins, the secondary market may well & truly make that point!