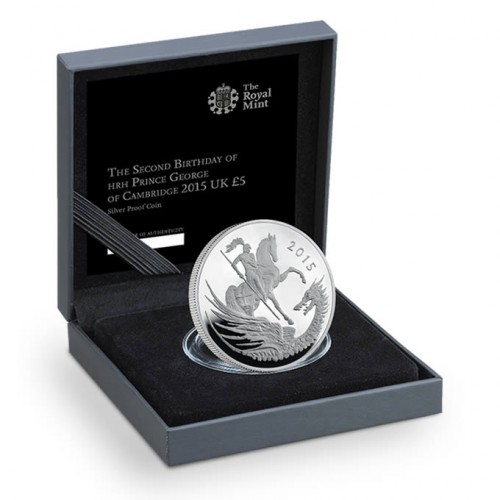 The Royal Mint have announced the issue of a new crown coin that celebrates the second birthday of one of the newest and youngest members of the British Royal Family, Prince George of Cambridge. The wedding of his parents, Prince William, Duke of Cambridge, and Catherine Middleton, now the Duchess of Cambridge, was an event televised to an audience of more than two billion people worldwide. The ceremony took place at Westminster Abbey on July 29th, 2011, with more than 500 invited guests and family members in attendance. The 2012 announcement of the impending arrival of their first-born was met with enthusiasm and good wishes. On July 22nd, 2013, Buckingham Palace announced the arrival of a healthy prince who was born in the same hospital as his father had been 31 years before. The new prince became third in line to the British throne, behind his grandfather HRH Charles, Prince of Wales, and his father, the Duke of Cambridge. The baby was named after his great-great grandfather, HM King George VI, father of his great-grandmother, Queen Elizabeth II. His christening took place at the chapel in St. James Palace, London, in October the same year. 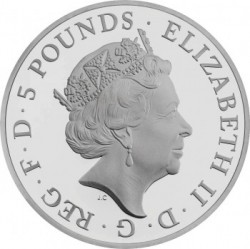 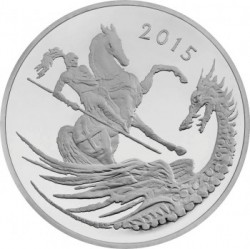 The crown coin is designed by artist Christopher Le Brun, whose previous works for the Royal Mint include the 2007 Britannia bullion coin, the 50 pence coin celebrating the 250th anniversary of Kew Gardens, and the magnificent Pegasus design that graced the five-ounce gold and silver proof coins issued on the occasion of the London 2012 Olympic Games. The reverse side is reminiscent of the 1935 commemorative crown, the first-ever British commemorative crown coin which was issued on the occasion of the silver jubilee of HM King George V, great-great-great grandfather of Prince George. The coin depicts Saint George on horseback, slaying the dragon, whose form completes the lower half of the coin’s overall design. This version of St. George slaying the dragon is only the third to be depicted on British silver crowns since 1817. The “2015” date of issue is placed toward the upper right side of the image. The new effigy of HM Queen Elizabeth II, designed by Royal Mint artist Jody Clark and unveiled earlier this year, is included on the obverse, along with the coin’s denomination.

This is the fourth crown coin associated with Prince George, the future King of the United Kingdom. His birth was celebrated with a silver coin, followed by coins issued to mark the occasions of his christening, first birthday, and now his second birthday. For more information on this and other coins offered by the Royal Mint, please visit their website. Information offered in English; international orders dispatched where applicable.