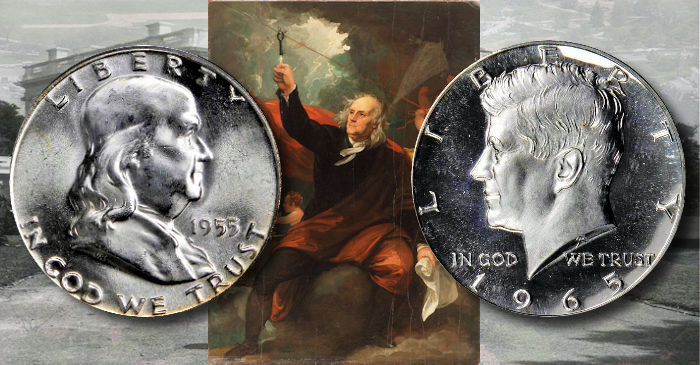 Franklin and Kennedy half dollars—how exciting! These are two of the most popular series in American numismatics.

Today, Franklin half dollars (minted from 1948 to 1963) are avidly collected. Scarcely a month or two goes by without excitement in the auction room when a particular variety described as FBL (Full Bell Lines), perhaps of a date and mint that is very common without this feature and otherwise inexpensive, sells for in the many hundreds or thousands of dollars. Beyond that, and probably most applicable to you, a basic set of dates and mintmarks in a highly desirable grade such as Mint State-65 can be collected relatively easily, with an attractive display being the result. Proofs were struck beginning in 1950, continuing to the end of the series, and provide a separate collection to go with the circulation strikes. 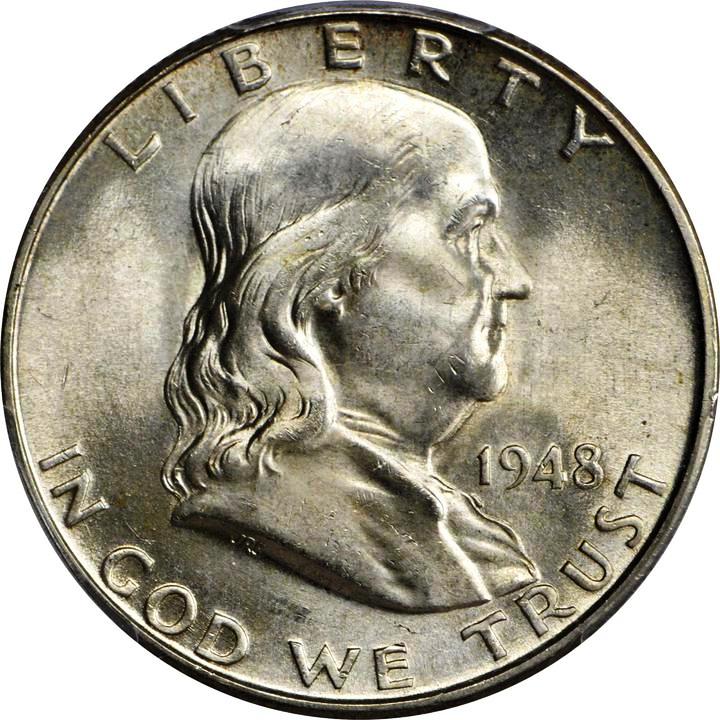 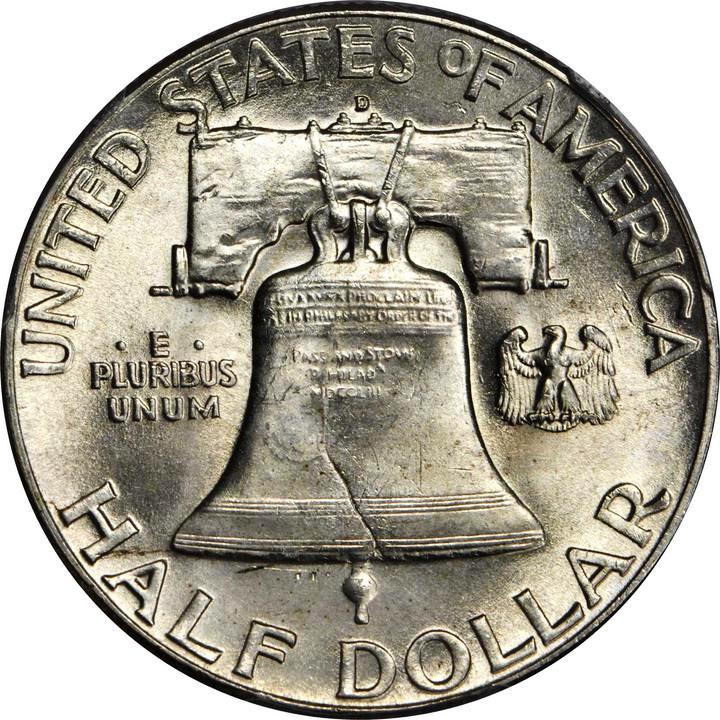 It was not always so. In 1948, when the Franklin half dollar made its debut, it was almost by surprise. Unlike today, when the activities of the U.S. Mint are chronicled in detail in Coin World, Numismatic News, and elsewhere, including information on engravers and designers, proposed motifs, and the like, hardly anything was said in the numismatic press about the discontinuation of the Liberty Walking half dollar (minted intermittently since 1916) and the impending issue of the Franklin. The only two regularly issued publications specializing in the hobby in 1948 were The Numismatist and The Numismatic Scrapbook Magazine. Neither paid much attention to these new coins. Part of this was due to the economic climate in America and also within the coin hobby. After World War II ended in 1945 the rush to buy choice, rare, and interesting coins continued apace—building on a boom that had started in 1943 when cash was common and consumer goods were scarce. By 1948 money was being spent elsewhere and the market cycle headed downward. A deep chill took place in numismatics, starting a slump that would not recover until after 1951. Relatively few new people came into the hobby, and there was no excitement at all with regard to the Franklins when they appeared. If anything, many collectors lamented the demise of Adolph A. Weinman’s artistic Liberty Walking design, a motif that is still popular today, as evidenced by the U.S. Mint finding no design to better use than this for the current silver bullion eagles.

John R. Sinnock, chief engraver at the Mint in 1948, was without numismatic glory or even much interest. He was a quiet individual, tended to his business, and was mainly remembered as the designer of the 1946 Roosevelt dime. Regarding the new half dollar, Sinnock did not do much in the way of original work. The obverse motif of Franklin was taken from one created earlier in the decade during World War II, as a proposal for a silver coin never issued. The reverse with the Liberty Bell was an off-the-shelf production, not much different from earlier appearances, say on the reverse of the 1926 Sesquicentennial of American Independence commemorative half dollar. Nothing original was made in 1948.

Production of the new Franklins (as they came to be called) ensued at the Philadelphia and Denver mints, but not at San Francisco. Then in 1949 all three active mints produced coins, but in 1950 San Francisco did not. This far Western mint was viewed as somewhat redundant in coinage production, as the Denver Mint had much more modern facilities and could strike coins more economically, enough so that it was cheaper to do striking in Denver and ship the coins to California, than to mint them there. In 1955 the San Francisco Mint closed for good, or so it was thought. In 1950—still a quiet time in the coin hobby—Proof sets were again made available by the Philadelphia Mint, the first time since 1915 that a suite including the cent, nickel, dime, quarter, and half dollar could be obtained. Collector interest was strong, but not memorable. That would change a few years later, around 1953, when the coin market became hot and Proof sets advanced to front-row-center in activity. The Philadelphia Mint received so many orders that it had to limit quantities. In the meantime, the price of earlier Proofs multiplied. From 1950 onward, Proofs could be added to Franklin collections. 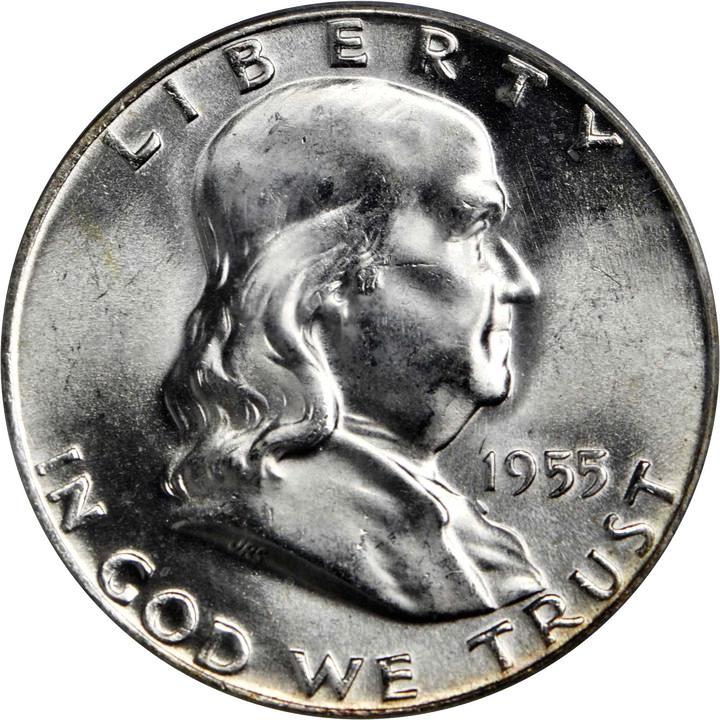 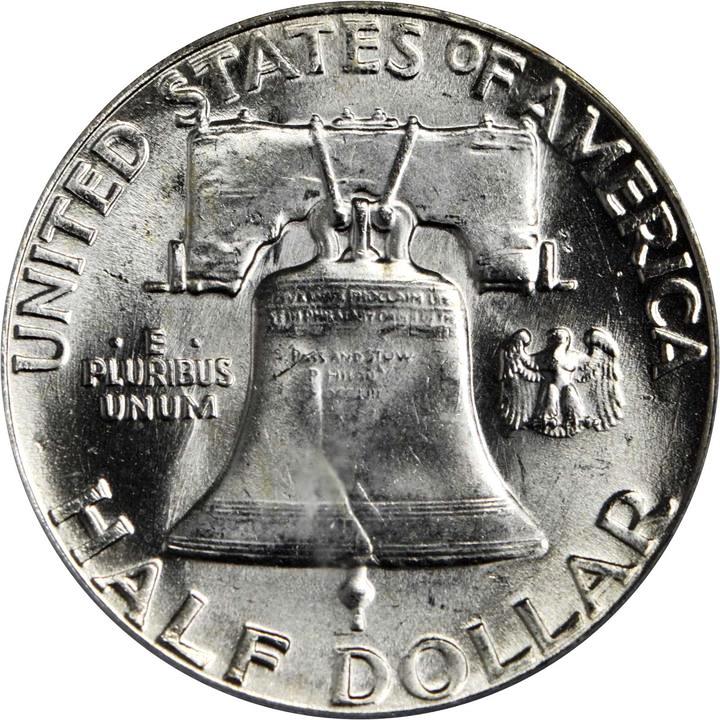 In 1955 and 1956 an especially sharp focus was placed on Franklin half dollars. This came about when it was learned that the 1955 Philadelphia Mint mintage for circulation was just 2,498,181 pieces, the smallest in the series. At that time the coin market was red hot, Proof sets continued to be very popular, and also bank-wrapped rolls of rare coins were in great demand by investors. The 1955 half dollar represented a dream come true: a low-mintage issue available for a modest premium or even at face value. Dealers and collectors scurried to banks, captured as many as they could, and found ready sale. Perhaps the most active dealer in these was Harry J. Forman of Philadelphia. 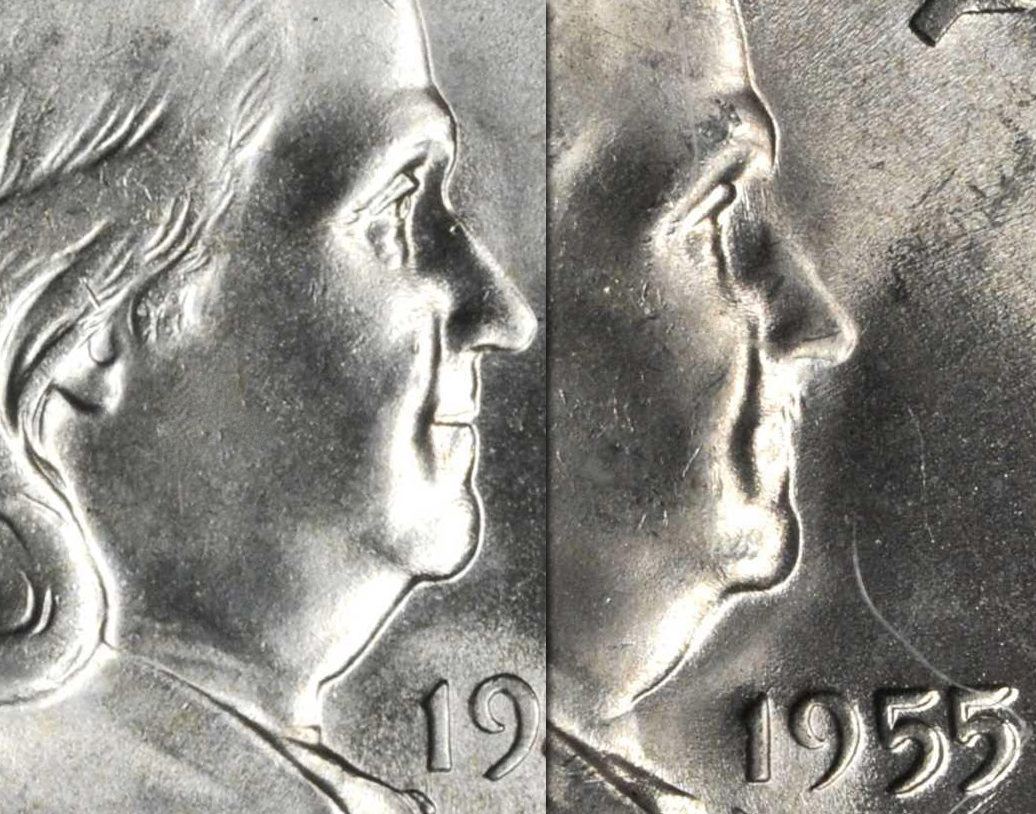 The 1955 “Bugs Bunny” variety: compare the upper lip of the normal coin on the left to the blurred and seemingly extended upper lip on the variety. (Hover to zoom)

At the same time, out in Omaha, Nebraska, Bebee’s, Inc., a coin dealership owned by Aubrey and Adeline Bebee, promoted a curious die variety, the “Bugs Bunny” half dollar. A die defect on the upper lip of Franklin caused some irregularities, which could fancifully be likened to the famous cartoon rabbit’s teeth. These caused even more interest.

As the years went on, production of half dollars continued routinely in response to the need for them in circulation. In 1963, Franklin half dollars were struck at the Philadelphia and San Francisco mints. Dies were prepared for 1964, and at least two examples were struck with this date, as evidenced by a comment made by Lester Merkin, a dealer remembered for his honesty and accuracy, who told me that he had personally met with a gentleman who showed him two of them. What happened to these two, or whether there were more, is not known today—a first-class mystery!  ⤵️

On November 22, 1963, President John F. Kennedy was shot and killed while in a motorcade in Dallas. The nation went into mourning. Commemorating Kennedy’s life and loss were countless souvenirs, ranging from stamps issued by obscure countries that no one ever heard of, to salt shakers, mugs, plates, medals, and posters. Although coinage law stated that designs could not be changed until they had been used for at least 25 years, such rules were meant to be broken, as they had been many times in the past (for example, with Standing Liberty quarters of 1916 to 1930). What a better way to honor the memory of John F. Kennedy than to place him on the largest-denomination coin in circulation? 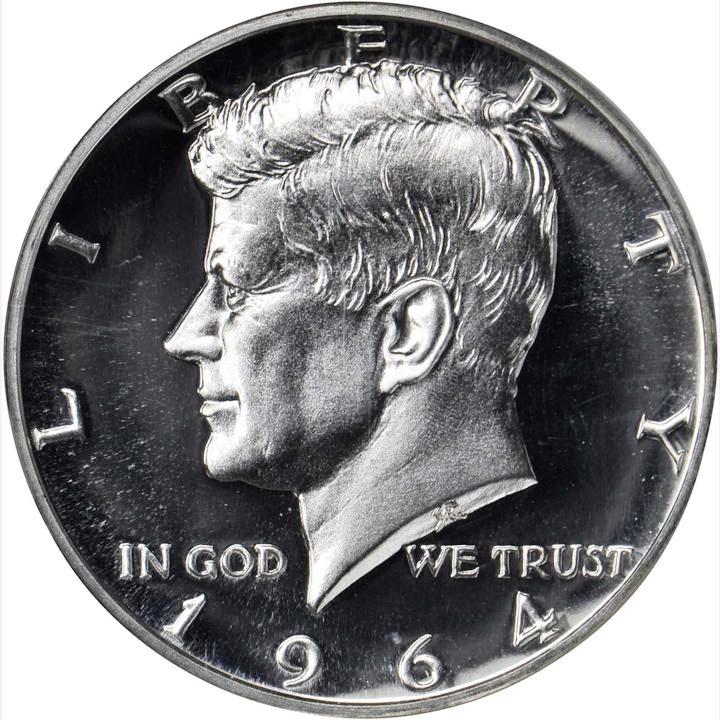 1964 Kennedy silver half dollar, Proof-69 Ultra Cameo. “Cameo” indicates that the raised devices, like Kennedy’s profile, are heavily frosted in comparison to the highly mirrored field. 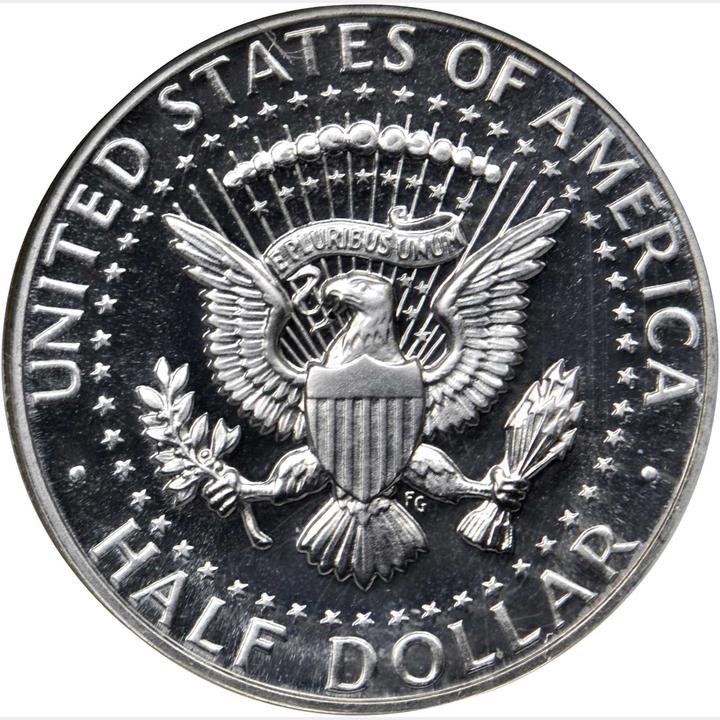 Chief Engraver Gilroy Roberts was tapped to create an obverse design, closely copied from another motif. His assistant, Frank Gasparro, was assigned the reverse and used a depiction of the Great Seal of the United States. Coin World and Numismatic News chronicled the forthcoming Kennedy half dollars week by week, while mass media paid close attention as well. All of this was in sharp contrast to what happened in 1948 when the Franklin half dollar made its debut. Now, excitement prevailed! In March, when the first pieces struck at the Philadelphia and Denver mints were released, there was a great rush to acquire them. Banks put limits on the numbers that any customer could obtain. At the time I traveled frequently to Europe, and all throughout the year 1964 Kennedy half dollars were in great demand there, selling at $4 to $5 each in terms of American funds, even when the demand slowed down in the United States and they were available here for face value. 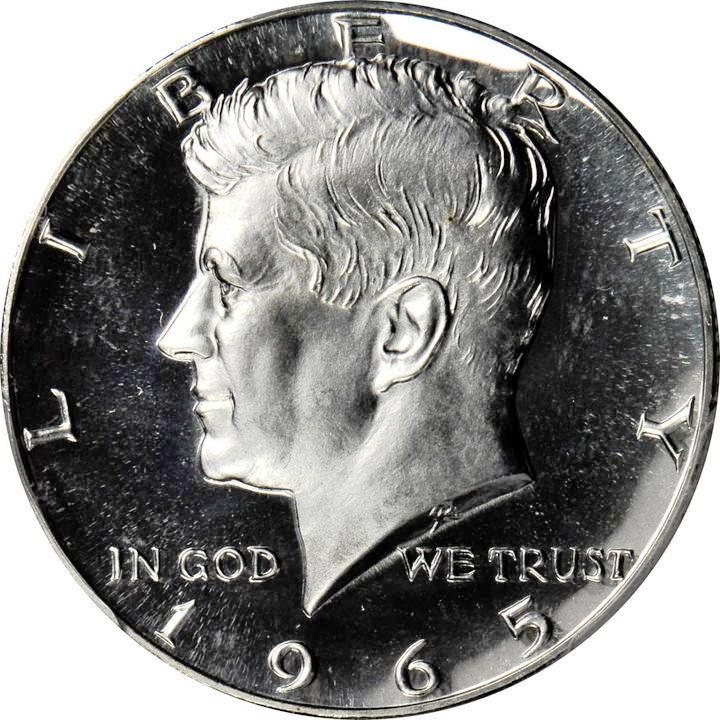 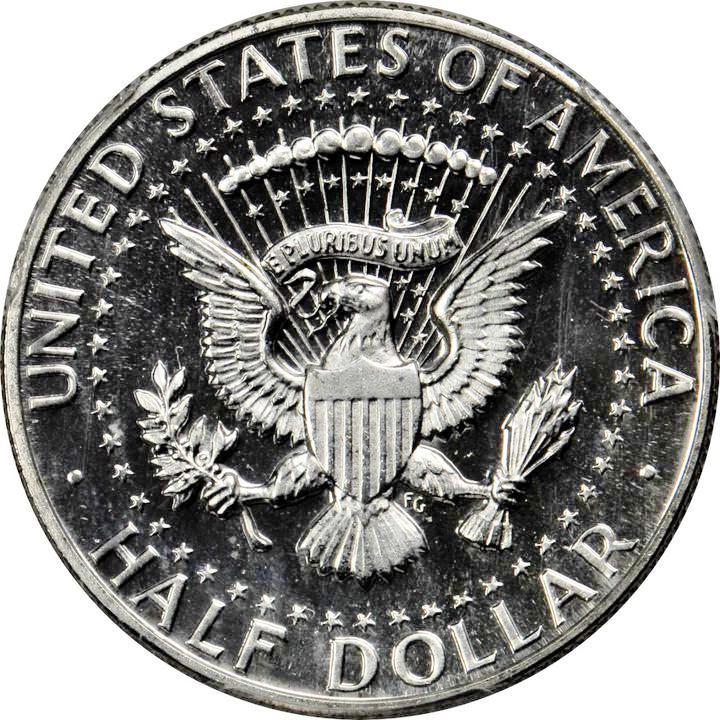 In the meantime, the price of silver bullion had been rising on international markets, making it unprofitable to continue the use of this metal in coinage, as it would cost more than face value to produce them. Accordingly, in 1965 a new “clad” composition was introduced for the half dollar, continued through 1971, using a small amount of silver in combination with copper and nickel. Then in later years just clad metal was used, except for certain silver strikes made for collectors.

A curious thing happened after Kennedy half dollars were introduced. Although the Philadelphia and Denver mints kept making large quantities of them, they were hardly ever seen in circulation. Where the hundreds of millions of them went is not known and remains somewhat of a mystery today. In the meantime, Washington quarters, the same design used since 1932, became the highest-value coin of the realm, in terms of circulation use. These were particularly popular for vending machines, arcade games, and the like. Today, this continues to be the case, and Kennedy half dollars, as well as the later mini-dollar coins, are almost never encountered. 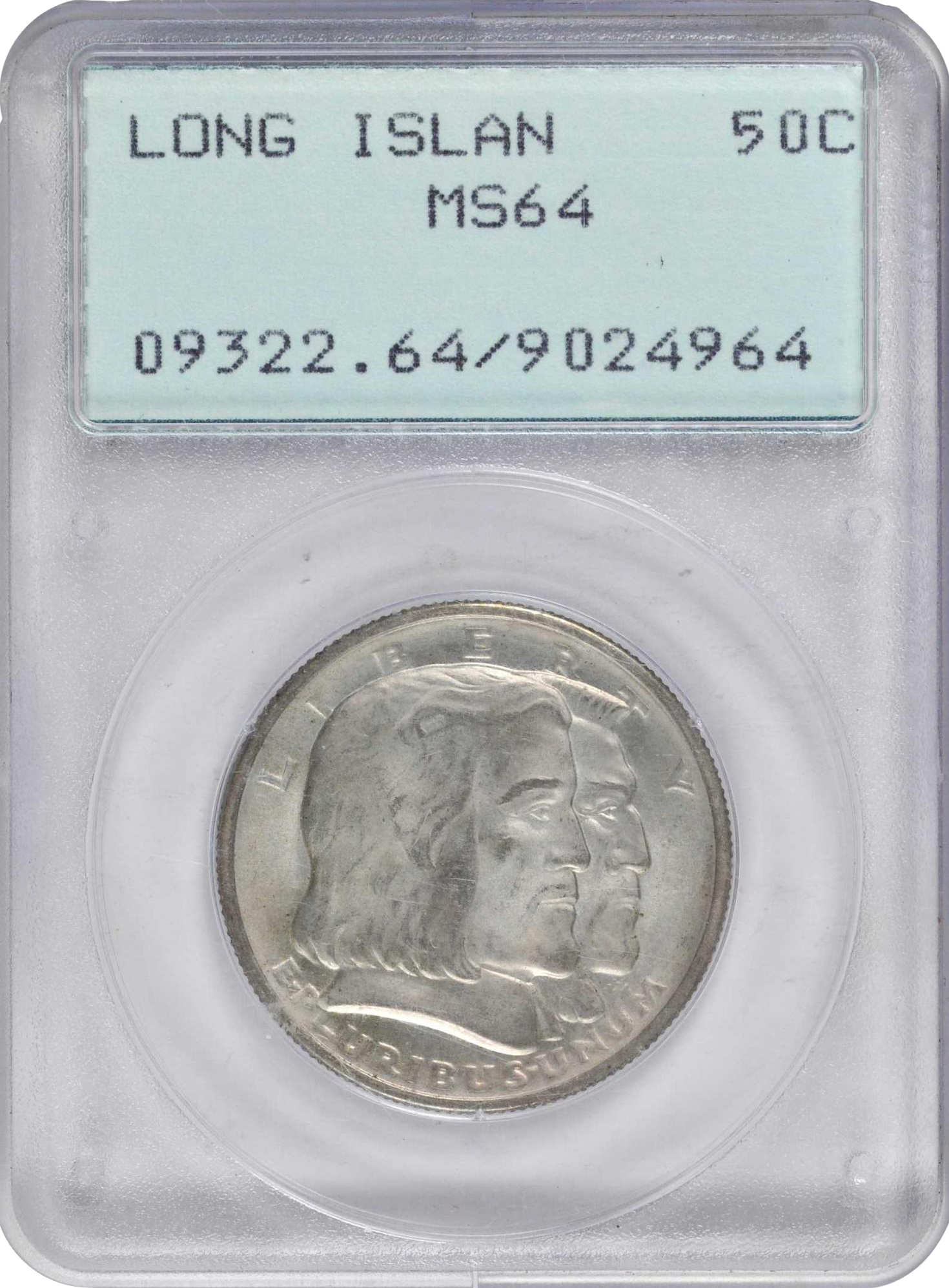 One of the earliest PCGS holders (“slabs”), of a type in use from February 1986 to September 1989. A few rare earlier 1986 labels were white. (PCGS has a timeline of all the labels on its holders.)

In the meantime, in the numismatic market, in 1986 David Hall and his associates formed the Professional Coin Grading Service (PCGS), which offered coins encapsulated in plastic “slabs” and marked with a grade. Numismatic Guaranty Corporation of America (NGC) began business a year later. Eventually, well over 100 certification services arose, nearly all have disappeared since then, but a handful survive, with PCGS, NGC, and ANACS being the leaders. The grading of coins became a highly technical and somewhat controversial matter, beginning in a significant way in the 1960s, and furthered by the issuance of Photograde (by James F. Ruddy) and The Official American Numismatic Association Grading Standards for United States Coins. Both of these adapted the numerical numbering system used by Dr. William H. Sheldon in 1949.

Today, numerical grading comprises many more numbers than when first conceived by Sheldon in. In the Mint State and Proof category alone we have all numbers from 60 through 70 inclusive, for a total of 11 in each category. We also have different degrees within this, such as + signs added by NGC and PCGS, and also stars and other designations. As grading is an art and not a science, not even the most sophisticated grader can consistently assign the same numbers to the same coins. No matter; people love numbers, and they will be with us for a long time to come. And, without question, a certified MS-66 coin is nearly always better than one certified as 63. However, cherrypicking for quality and extra value, something the Guide Book of Franklin and Kennedy Half Dollars (third edition now available for preorder) will aid you in doing, can often lead to finding a 65 that can be certified as a much more valuable 66.

The “Full Bell Lines” designation: note the weak horizontal rings on the bell at the top, compared to the distinct rings on the FBL example below.

Other designations arose, such as FBL in the Franklin series for the earlier-mentioned Full Bell Lines half dollar. On the reverse the horizontal lines at the bottom of the Liberty Bell can be “full” or on the highest areas can be blended together indistinctly. By study of many pieces it was found that certain varieties that are as common as can be, including in high grades, but without FBL, can be great rarities if the bell lines can be discerned. Great rarity means great value, and the race was on! Within Proofs, such designations as Cameo, indicating a frosted head, came into use, and created extra value, especially for years of Franklin and Kennedy half dollars in which frosted or cameo portraits were in the minority among Proofs.