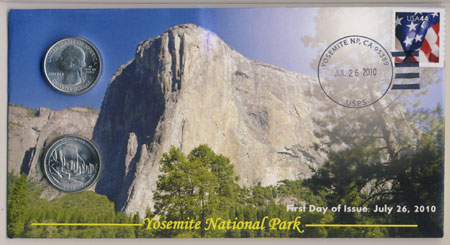 The Yosemite National Park Quarter features a view of the granite monolith known as El Capitan. The coins were first released into general circulation on July 26, 210. The official launch ceremony and coin exchange took place a few days later on July 29, 2010.

The coin covers include one Yosemite Quarter from the Philadelphia Mint and one from the Denver Mint, obtained in Washington, D.C. during the first day of issue. The coins are mounted an envelope illustrated with a picture of El Capitan. The back of the envelope includes brief history and description of the park and quarter design. A 44-cent Flag postage stamp is postmarked Jul 26 2010 Yosemite NP, CA 95389. This cancellation is from the circulation release date at the Yosemite National Park post office.

The covers are packaged in AllSyte plastic FDC holders for protection and display. About 100 of the coin covers post marked at Yosemite National Park were created, with a smaller number of covers created postmarked at Union Station in Washington, DC.

These collector created products can be found for sale at this eBay seller account.