The Perth Mint of Australia has announced a sell out of the entire maximum production for the 1 oz Year of the Tiger Gold Bullion Coins. The coins were initially released on September 1, 2009 and limited to a maximum production of 30,000 coins. 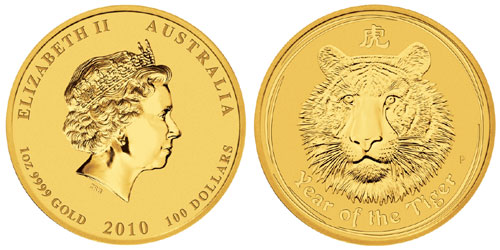 “Like other mints, we benefited from the dramatic pick up in gold bullion during the world financial crisis,” said Ron Currie, Sales and Marketing Director for the Perth Mint.

“Since then our objective has been to maintain sales at a much higher level than pre-WFC. We’ve had a close look at our production and international distribution strategy with the result that we’re now much better placed to satisfy demand.”

The reverse of each coin features the image of a Tiger with an inscription “Year of the Tiger” and the Chinese symbol for Tiger. The obverse features the effigy of Queen Elizabeth II with inscriptions indicating the gold content, purity, and legal tender face value. Each coin is struck in .9999 pure gold.