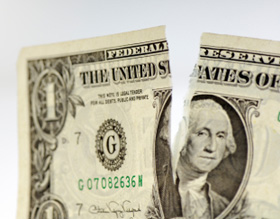 If you asked the average American if it would be a financial catastrophe if the US dollar failed, I’m sure he or she would emphatically agree.  In fact, I suspect those answering the question would consider the possibility to be a disaster of epic proportions.

But, if you really think about it, maybe it wouldn’t be quite that horrific.

Here’s what happened in other countries that recently experienced a failed or replaced currency.

The African nation of Zimbabwe suffered such high inflation of the money supply that reached 49 billion percent per month by early 2009!  One writer told me of visiting the country a few years ago.  After he checked into his hotel, he went to the pool for a dip.  He passed the bar on the way and asked how much it cost for a beer.  The bartender told him $100 million. After he cooled off in the pool, he stopped at the bar to order that beer and was told that the price was now to $150 million!  By 2008 the Reserve Bank of Zimbabwe was issuing $100 Trillion notes.

With prices changing so rapidly, commerce nearly ground to a standstill.  Merchants found it almost impossible to purchase inventory and then price it for sale.  Consequently, few merchants had any goods to offer to sell.

On January 31, 2009, the government announced that the South African rand, Euro, US dollar, and other currencies would be legal tender in the country.  The government suspended the use of Zimbabwe’s currency on April 13, 2009.

In a mid-2010 report, trade policy analyst Albert Makochekanwa stated that Zimbabwe’s inflation rate immediately fell to less than 1% per month.  Within a year, manufacturing and production activity in the country had increased by 35%.

By being able to buy goods for payment with currencies that suppliers would accept, local merchants were again able to purchase and sell merchandise.  Stores that previously had little or no inventory could now operate normally and profitably.

The result of the failure of the Zimbabwe dollar was a huge economic boom!

A similar story resulted after Ecuador abolished its own sucre on September 15, 2000 and declared the US dollar to be the standard legal tender.  At the time of changeover, it took 25,000 sucres to equal one US dollar.  As an interesting side note, Ecuadorians are not comfortable carrying paper money, so the US Mint shipped 500 million 2000-dated Sacagawea dollars to Ecuador to satisfy demand for coinage.

There was even a currency failure in early American history.  The Continental Dollars issued during the Revolutionary War quickly fell so far in value that they inspired the phrase “Not worth a Continental.”   The new nation eventually established a relatively stable dollar defined as a fixed weight and purity of silver or gold.  The government also redeemed outstanding Continental Currency at the rate of one new dollar for every 100 Continental dollars, though it took until the early 1800’s to fully pay off this exchange.

But, just like what happened in modern Zimbabwe and Ecuador, the ability to use a stable currency, even during times when multiple forms of money circulated side by side, the US economy started growing.

If the US dollar failed today, there would be significant problems, in large part because of the widespread use of the dollar as an international reserve currency.  So any transition would not be as smooth as experienced by Zimbabwe or Ecuador.  However, as long as the US government did not try to impose a new fiat monetary system, I am confident that the free market would quickly establish a stable monetary system that would spark the return of prosperity faster than most people expect.

I’m not necessarily saying that the US government is mismanaging the US dollar so badly that it will soon fail.  But I am saying that if the dollar failed, I don’t think it would be as bad a development as most people would fear.