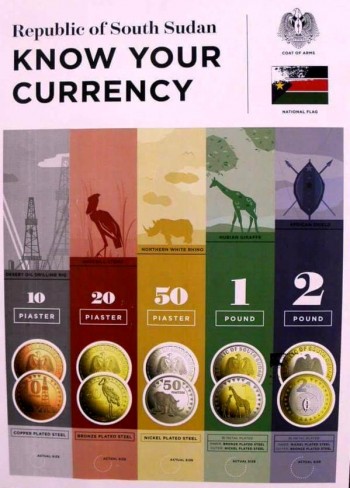 The Bank of South Sudan has issued (July 9th) their first-ever series of circulation coins that correspond to the South Sudanese Pound issued four years ago. The South Sudanese pound (SSP 1 = USD 0.17) was originally planned to be divisible by 100 piastres and was only issued in denominations of 1, 5, 10, 25, 50, and 100 pound values. For much of the public and merchants, change for a pound was made with small items, such as candies, or the cost was rounded up to the nearest pound. Three smaller values of 5, 10, and 25 piastre notes were later issued the same year. Minted in values of 10, 20, 50 piastres, as well as new one and two pound denominations, these new coins result from the South Sudanese Central Bank’s efforts to make cash transactions between buyer & seller easier. The Central Bank will also save on the cost of replacing the smaller banknotes issued in similar denominations, and it is likely these notes will be phased out as the new coins begin to circulate widely.
The Republic of South Sudan began a long, protracted war for independence from Sudan as early as 1972. The first war resulted in the creation of the Southern Sudan Autonomous Region; a second war was launched in 1983, until a cease-fire agreement was reached. In 2005, another peace agreement was negotiated, resulting in the establishment of an independent state on July 8, 2011. Formerly the largest country on the African continent, Sudan was primarily split between religious factions, with a predominantly Muslim population living in the north of the country and a predominantly Christian population in the south. Additional divisions of the Sudanese peoples were rooted in ethnic differences between Arab tribes to the north and sub-Saharan African peoples living in the south. As the government of Khartoum agreed to recognize South Sudan, the city of Juba, home to the Bank of South Sudan, became South Sudan’s capital.
On July 18, 2011, the Sudanese Pound was replaced with banknotes exhibiting the portrait of John Garang de Mabior (1945 – 2005), leader of the rebellion that eventually gained the nation’s independence. The new coins, however, do not include Mabior’s portrait, but instead depict symbols of the country’s most important commodities: oil and native wildlife. The obverse of all five coins displays the crest of South Sudan.
10 Piastres: Copper-plated Steel – Oil rig.
20 Piastres: Bronze-plated Steel – Shoebill stork.
50 Piastres: Nickel-plated Steel – Northern white rhino.
1 Pound: Bronze-plated Steel centre / Nickel-plated Steel ring – Nubian giraffe.
2 Pounds: Nickel-plated Steel centre / Bronze-plated Steel ring – South Sudanese Shield.
The two highest denominations are bi-metallic, while the three smaller values are issued in copper, aluminium-bronze, and nickel-plated steel pieces. No news is currently available about where the coins were produced.