At a ceremony held on December 10, 2014 in Emancipation Hall at the U.S. Capitol Visitor Center, a Congressional Gold Medal was collectively awarded to the World War II members of the Civil Air Patrol (CAP). The medal recognizes the organization for their humanitarian, combat, and national services during a critical time for our nation.

The unpaid volunteer civilian members of the Civil Air Patrol had used their own aircraft and personal funding to perform a myriad of essential tasks for the military and the Nation during World War II. From March 1942 to August 1943, the heroic aircrew is credited with escorting more than 5,600 convoys, reporting 173 U-boats and attacking 57, flying 86,685 total missions, logging 244,600 total flight hours, and flying more than 24 million total miles.

Under Public Law 113-108, enacted on May 30, 2014, a single Congressional Gold Medal was authorized to be awarded to the World War II members for the Civil Air Patrol in recognition of their exemplary record during World War II. 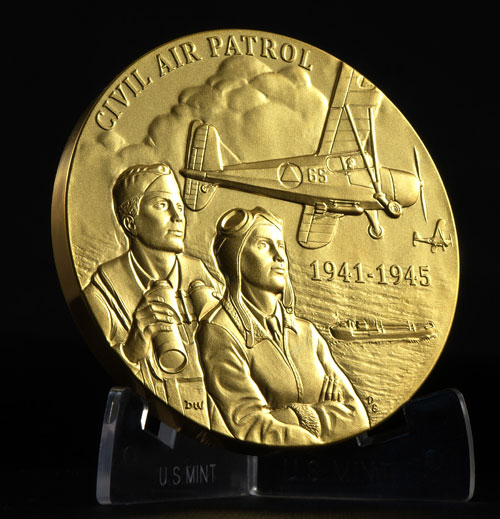 The obverse design of the medal features a depiction of two CAP volunteers looking towards the skies. In the background, a tanker is escorted by CAP planes overhead. The inscriptions read “Civil Air Patrol” and “1941-1945”. The obverse was designed by United States Mint Artistic Infusion Program designer Donna Weaver and sculpted by United States Mint Sculptor-Engraver Don Everhart. 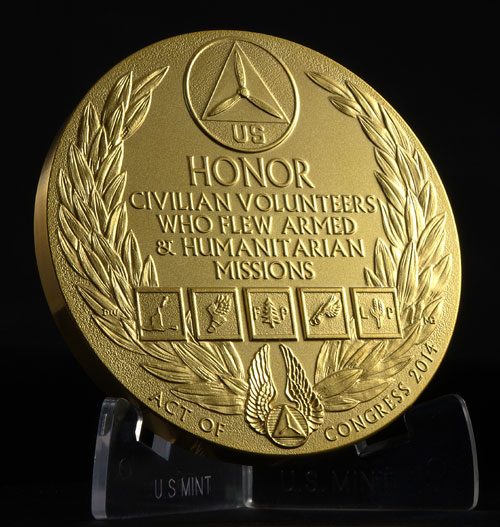