The Royal Mint have issued their second six-coin set of crowns which remember the 100th anniversary of the commencement of the Great War or as it was later termed after 1945, World War I. 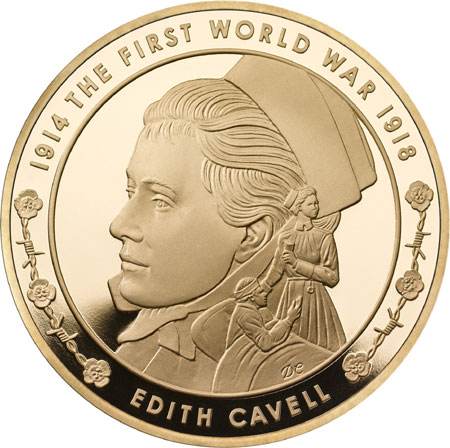 Edith Cavell: The coin depicts a scene with the ever-vigilant Edith tending to a wounded soldier with a portrait-style design of the selfless nurse in her uniform as the background. Inspired by the words of Laurence Binyon’s moving poem, Edith Cavell, the coin’s inscription reads ‘SHE FACED THEM GENTLE AND BOLD’ Edith Louisa Cavell, (1865 – 1915) a British nurse, is celebrated for saving the lives of soldiers from both sides without discrimination and in helping some 200 Allied soldiers escape from German-occupied Belgium during the First World War, for which she was arrested. She was subsequently court-martialed, found guilty of treason and sentenced to death. Despite international pressure for mercy, she was shot by a German firing squad. Her execution received worldwide condemnation and extensive press coverage. Cavell was executed on the 12th October 1915, she was later venerated by the Anglican Church with her feast day being celebrated on the day of her death. The coin is designed by David Cornell of the Royal Mint. 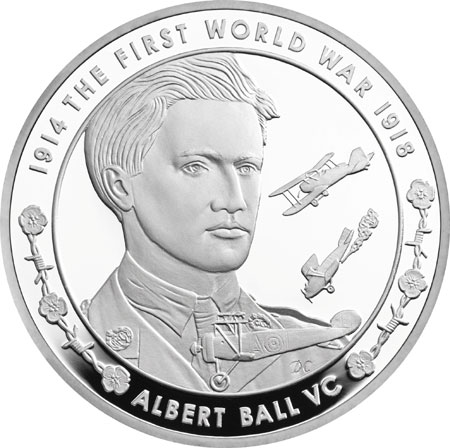 Albert Ball VC: Albert Ball has been depicted in a portrait-style design, in uniform, with his beloved flying machines around him. The coin’s inscription reads ‘BY FAR THE BEST ENGLISH FLYING MAN’ a quotation from his most renowned enemy, Manfred von Richthofen, known as the Red Baron, upon hearing of Ball’s death. Albert Ball (1896 – 1917) was an English fighter pilot during the First World War. At the time of his death he was the United Kingdom’s leading flying ace with 44 victories, and remained its fourth-highest scorer. Ball’s death was reported world-wide in the press. He was lauded as the “wonder boy of the Flying Corps” in Britain, the “Ace of English Aces” in Portugal, the “heroe aviador” in South America, and the “super-airman” in France. The coin is designed by David Cornell of the Royal Mint. 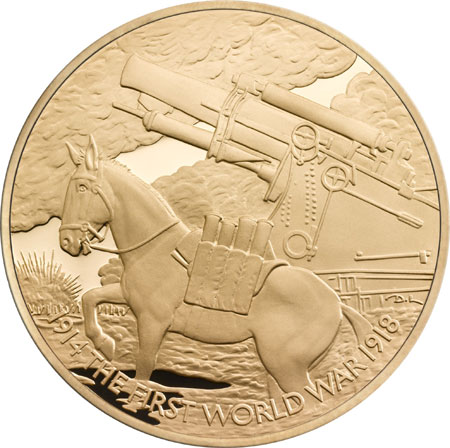 Animals at War: A striking design places a mule at the center of the composition depicting the heat of battle. The coin’s inscription, ‘PATIENT EYES COURAGEOUS HEARTS,’ is taken from Julian Grenfell’s poem, Into Battle, inspired by nature and its comforting qualities during conflict. The Animals in War Memorial in Hyde Park, London is located on Park Lane and was designed by English sculptor David Backhouse to commemorate the countless animals that have served and died under British military command throughout history. It was unveiled in November 2004 by HRH Princess Anne, the Princess Royal. The coin is designed by David Lawrence of the Royal Mint. 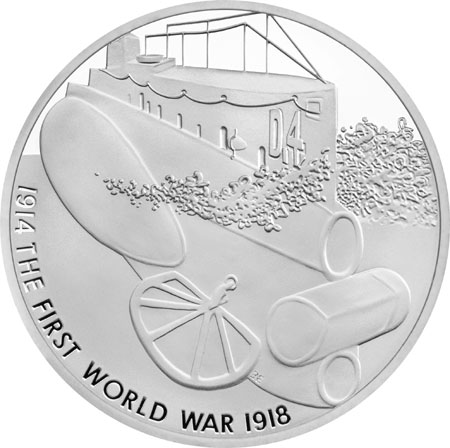 Submarines: This design is dominated by the submarine with a perspective view that emphasizes the sinister, underwater threat of the vessels. The inscription ‘IN LITTLE BOXES MADE OF TIN’ is taken from Rudyard Kipling’s poem, The Trade, one of his many maritime-themed poems.  The coin design is the work of by Edwina Ellis. Edwina also designed the coin depicting a Howitzer which featured in the initial six-coin set. 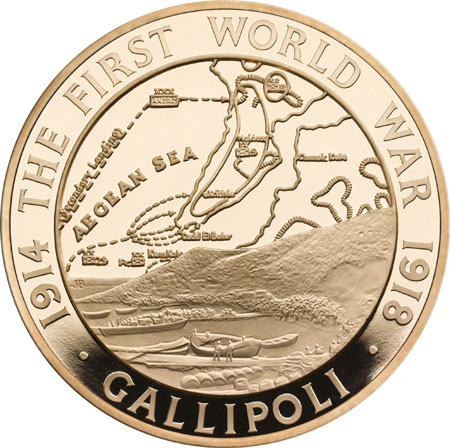 Gallipoli: This design for Gallipoli was created by John Bergdahl, who has placed a strategic map as his background, with a scene in the forefront that depicts boats landing at the shores of the peninsula. The coin’s inscription, ‘HEROES THAT SHED THEIR BLOOD’ is taken from the Kemal Ataturk Memorial. Named after the commander who led the Turkish 19th Infantry Division when it repelled the Allied attack, the memorial honours those who fought gallantly in Gallipoli. John also designed the coin honoring the British Expeditionary Force which featured in the previous six-coin set. The Gallipoli coin included in this six-coin set was also included in an earlier memorial four-coin set offered by the Royal Australian Mint which featured coins from Australia, New Zealand, the United Kingdom and Turkey. 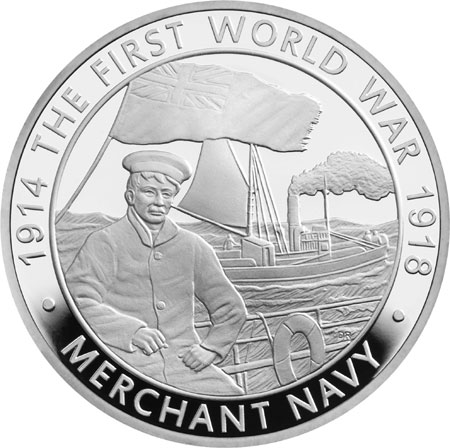 Merchant Navy:  The design of this coin includes a lone sailor poised upon the deck of a merchant vessel. The inscription ‘SEPULCHRED IN THE HARBOUR OF THE DEEP’ is taken from the poem, HMS Bulwark Britannia to Her Lost Seamen by William Trend. The coin is designed by David Rowlands of the Royal Mint. This is David’s fourth coin for The Royal Mint; two of his reverse designs were selected for the 2014 six-coin set and he created the Royal Navy commemorative £2 coin for 2015. 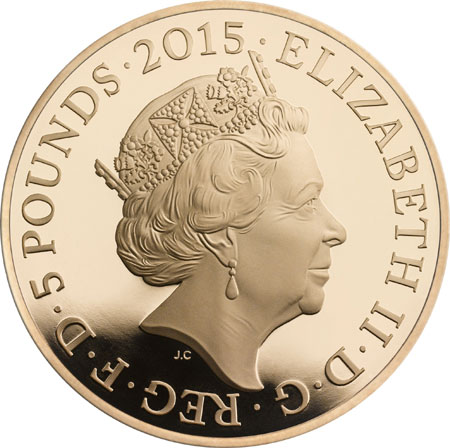 Each crown coin includes the latest and fifth portrait of HM Queen Elizabeth II which was designed by Royal Mint engraver Jody Clark and unveiled in March of this year.

Each year until 2018, a set of six coins will be released that cover a range of themes; key battles, the armed forces and support services, technological developments of the period, the cultural impact of war and stories of some of the heroes of the time. The final set will be a poignant reflection on armistice and the on-going legacy of the war. Of the 2500 pieces of each coin, only 1915 complete sets will be offered in both the silver & gold options.

For more information on these and other coins paying tribute to the 100th anniversary of the First World War, please visit this section of the Royal Mint website. Information offered in English, international orders dispatched.