This year’s Media Forum held during the World Money Fair in Berlin was full of tempting surprises for the upcoming coin programs of the Mints and Central Banks presenting just some of the their outstanding and upcoming issues. This year’s forum was attended by more than 300 participants & journalists and was hailed as the most successful yet by WMF organizers in terms of content and coverage.

In all, 15 National Mints / Central Banks made presentations on the opening day of the World Money Fair – here are just a few of the highlights. Be sure to check our bulletin pages for further information about these coins when they are launched. 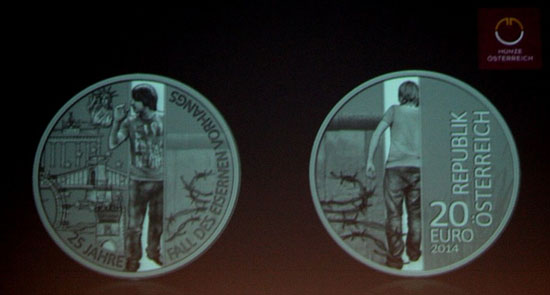 The Mint of Austria, guest hosts of the 2014 World Money Fair, were the first to present, highlighting their immensely successful niobium and silver coins. The new two-tone niobium coin entitled “Dawn of a new era” was their lead into several gold and silver items. Another upcoming issue will commemorate the 25th anniversary of the fall of the Berlin Wall, a fitting venue for this announcement. The coin depicts a stark and clever image of a man passing through the wall from both sides – a coin to watch out for later on in the year.

Brazil – the first time their Mint has presented at the WMF, introduced their upcoming Olympic coin program – a total of four gold coins and sixteen silver coins issued over the next three years. Subjects included in the Olympic program will range from flora and fauna to music and architecture from the largest nation in South America. A set of sixteen bi-metallic one Reais coins is also planned which will concentrate more on the sports associated with the summer games. The Casa da Moeda also confirmed their international distributor will be MDM out of Germany and the Banco do Brasil for coin purchases in the country. 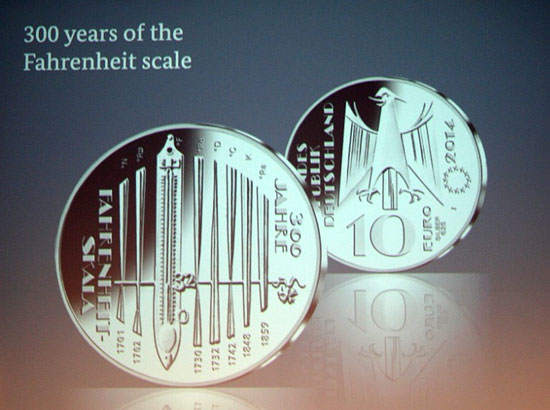 The Federal Republic of Germany through their official sales offices presented the 2014 €100 gold UNESCO series. This year’s coin will highlight the Lorsch Monastery and will be launched later on in the year. Lower Saxony is to feature on the new €2 commemorative coin which will be available as a five-coin packaged BU and proof set with all five mintmarks included. An upcoming €10 coin will mark the 150th birthday of composer Richard Strauss and curiously, a €10 coin marking the 300th anniversary of the Fahrenheit scale will also be launched later on in the year. 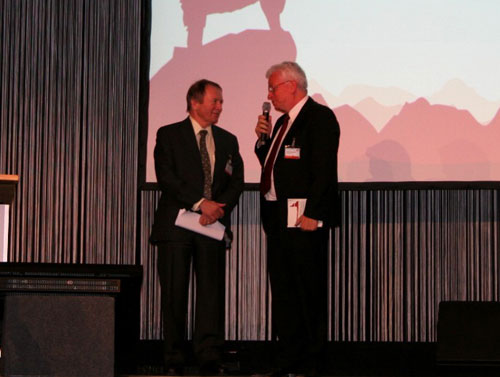 Canada’s presentation which was headed by CEO Ian Bennett discussed the success of last year’s more than 230 separate products offered by the Royal Canadian Mint. The Mint – according to Mr. Bennett will endeavor to reach this level in 2014 and then some. Mr. Bennett also announced that this year’s WMF will be his last as he announced that he will step down in June. He was warmly congratulated by President Hans-Henning Gohrum for his many years at the RCM and his past participation at the WMF.

The Mint of Japan highlighted their continuing “Prefectures” coin series – the next three coins in the series will feature the prefectures of Ehime (33), Yamagata (34), and Mie (35) which are scheduled for issue in the first half of the year. 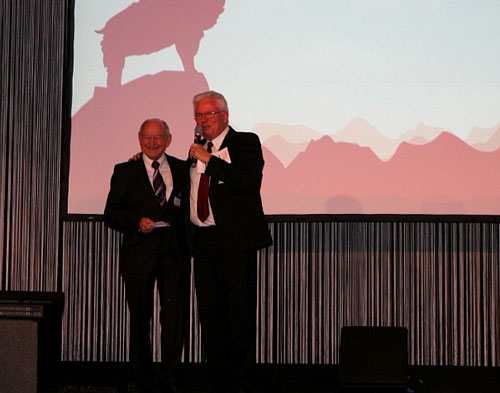 Switzerland announced the issue of a collector coin of 20 Francs which marks the “Patrouille Suisse” as well as a 20 Franc silver coin which features the well-known Swiss card game “Jass” or “Jassen”. Their 50 Franc gold coin marks the 100th anniversary of the Swiss National Park designation. In another surprise announcement, Kurt Roher, the General Manager of the Swiss Federal Mint announced he was also retiring. Mr. Roher was also congratulated by Mr. Gohrum for his service to the Swiss Mint and for being a great support to the WMF. 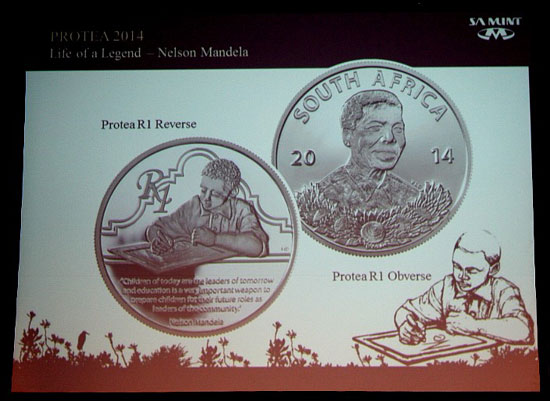 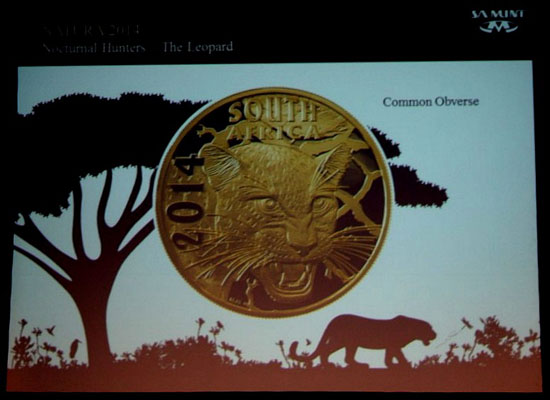 South Africa took the opportunity to highlight their memorial coins to the late Nelson Mandela. The series, “Life of a legend” continues from the first 2013 dated protea 25 rand and one rand coins. There will be a 2014 dated gold and silver coin focusing on the President’s early life and his early education. Their “Nocturnal hunters” series focuses on the Leopard with various depictions on the gold set. Their silver two Rand crown will feature electric trains & locomotives – a popular theme with many collectors. 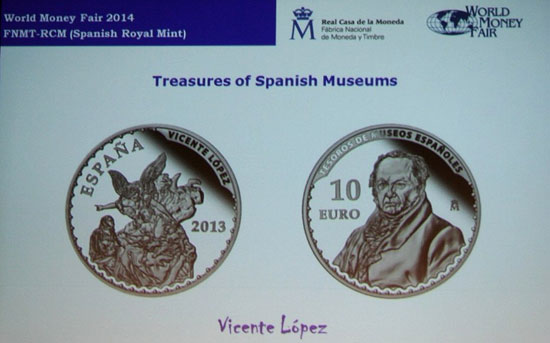 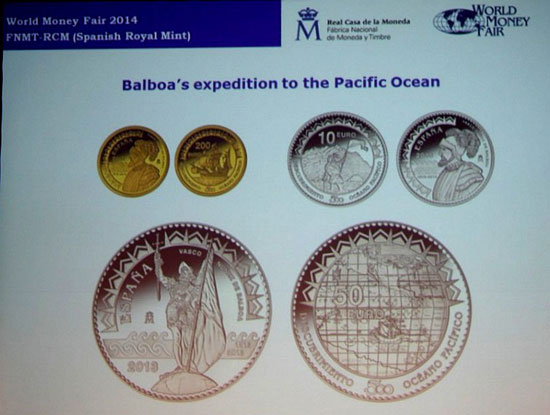 Spain’s Casa Real will issue a series of gold and silver coins entitled “Treasures of Spanish Museums” featuring the works of artists Velasquez, Vincente Lopez and Raphael with a stunning series depicting some of their most well-known pieces. Another series to be issued features Vasco Nunez de Balboa’s expedition to the Pacific ocean. 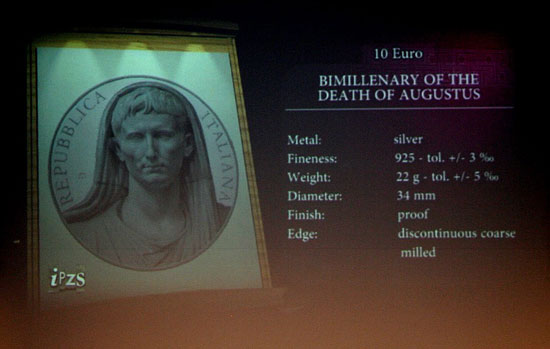 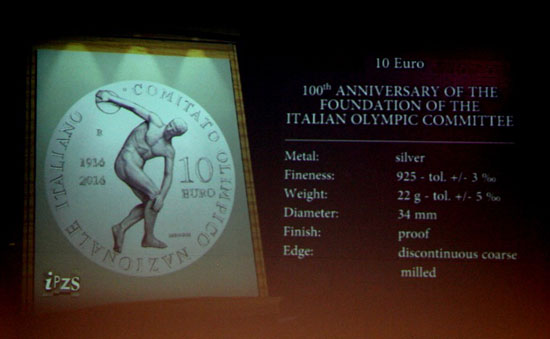 Italy’s National Mint announced the issue of an eagerly anticipated coin which marks the 2000th year of the death of Augustus Caesar with an exceptionally designed €10 silver coin bearing one of the more familiar sculptures of the Roman State’s first consul general and later, its first emperor. Another exceptionally designed €10 silver coin from Italy will be issued to mark the 100th anniversary of the Italian Olympic committee. 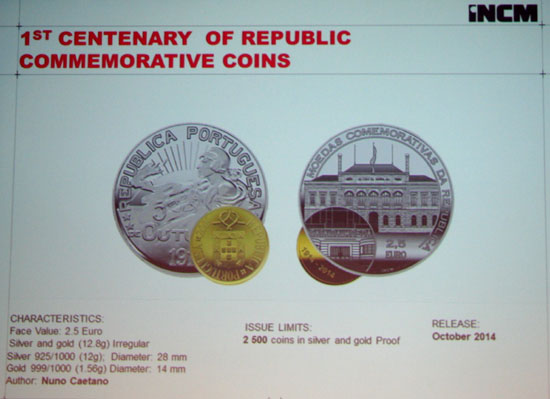 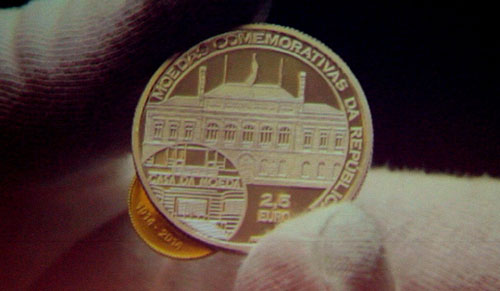 Portugal highlighted one especially innovative coin which fuses together two coins from the Portuguese Republic, that of their very first commemorative coin struck in 1914 – though dated 1910, and the addition of a gold coin which is conjoined with a clever process. The coin marks the 100th anniversary of the coin which commemorated the birth of the Republic in October 1910 and this issue re-creates the very popular design which featured on the one escudo coin. 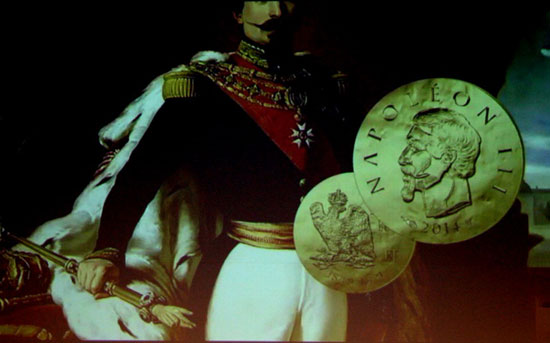 France and the Monnaie de Paris will continue in 2014 with its popular “From Clovis to the Republic” designed by famed couturier Christian Lacroix with designs that include effigies of Louis XIV, Napoleon and Napoleon III.