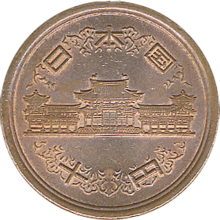 A Japanese coin featuring a pagoda and kanji.

The reason most people seem to get into numismatics at first is because they discover a coin that they want to learn more about. Perhaps it is a “Wheat penny” or a “Peace dollar” discovered hidden away in some relative’s attic-bound boxes. Whatever the case may be, curiosity about what we see struck and engraved on metal pulls at all numismatists.

Various Chinese coins featuring the “hole in the middle.”

I remember as a child, my father—a Delta pilot since I was born—would bring home money from the various countries he flew to. For a long time he traveled the “Europe circuit,” visiting such countries as England, Ireland, France, Germany, and Belgium. These days he follows the “Asia circuit,” which travels to India, Africa, China, Japan, and Korea. And every time he came home, he would empty his pockets into a huge glass goblet that sat on his dresser in my parents’ bedroom. I used to run my fingers through the huge mound of scattered coins and bills, each with a different country and design. Before he would return to a certain place, he would go through the pile and pick out euros, pounds, yen, and other pieces of metal that would serve his need abroad. 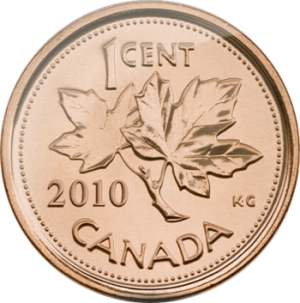 The reverse of a one-cent Canadian coin.

I had an old, clear-plastic tackle box where I would put all of the oddments my father would hand to me for fun—the first was a simple Canadian penny; I no longer remember the year. I loved the maple-leaf design on the reverse, and how much smaller it seemed than a U.S. penny. I loved the Chinese coins that had the hole drilled through the center; the Japanese coins with the beautiful, calligraphic kanji engraved among the scenery; the thick British pounds that bore lettering around the edge and weighed so heavily in my hand—things he would pick up as he went about his job. They were trifles to him, but exotic and exciting to me. I wish I remembered what country-of-origin belonged to the coins that left only vague imprints on me of leaping deer and flowers and trout. I would search for them again, now that I have a stronger understanding of what it is I had. 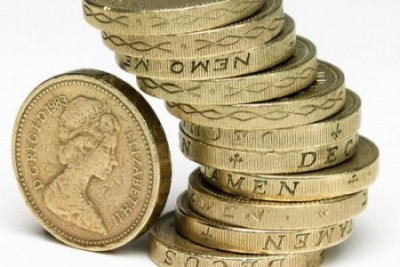 A stack of British one-pound coins.

Today my random scramble of foreign coins fits in a tiny teal-brocade bag on my desk. It is not worth anything more than face-value, if that, and it likely never was. I doubt any rarity ever passed my fingers. But every now and then I pick the bag up and heft it or go through the coins. Sometimes I just look at them, reminiscing, enjoying the feel of metal on my palm and the multi-faceted origins represented there. I can truly feel as if I have the whole world in my hands.