The United States Mint is now accepting orders for circulating quality examples of the 2013 Woodrow Wilson Presidential Dollars. These are available in roll, bag, and box quantities with coins carrying either the “P” or “D” mint mark. This represents the fourth and final release of the year for the Presidential $1 Coin Program and the twenty-eighth release for the series overall. 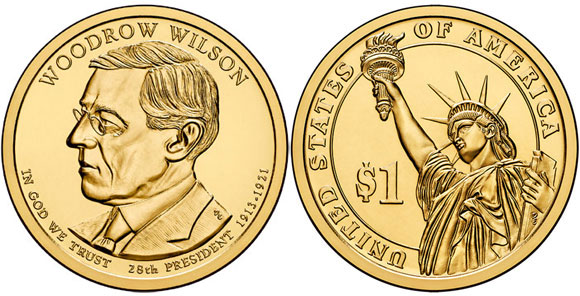 The obverse design of the coin features a portrait of President Wilson designed and sculpted by Don Everhart. The required inscriptions appear surrounding, with the President’s name, the motto “In God We Trust”, the order of the Presidency, and the dates served “1913-1921”. The reverse of the coin, which was also designed and sculpted by Everhart, features an image of the Statue of Liberty with inscriptions “United States of America” and “$1”. The date, mint mark, and motto “E Pluribus Unum” are placed on the edge of the coin as incused lettering.

A standard shipping and handling fee of $4.95 applies to all domestic orders. An additional charge of $7.95 per box applies to the 500-coin box products.

The coin wrappers or canvas bags used as packaging for the coins includes an indication of the name of the President, the mint mark, and the face value of the contents.

Next year will mark the eight year of the ongoing series. The first release of 2014 will feature President Warren Harding.