Today, the Women Airforce Service Pilots (WASP) of World War II were honored with the Congressional Gold Medal. A ceremony was held at the Capitol Visitor Center with both surviving members of WASP and representatives of the deceased participating in a ceremony.

The Congressional Gold Medal is intended to honor WASP members for their pioneering military service that led to reform in the U.S. Armed Forces. The WASP was composed of the first women in history to fly American military aircraft. They flew more than 60,000,000 miles in every type of aircraft and on every type of assignment flown by their male counterparts except combat missions. 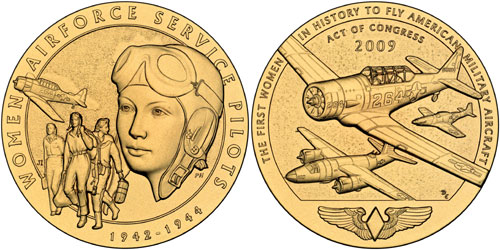 The WASP Congressional Gold Medal obverse depicts the portrait of a WAP member and three others with an AT-6 in the background. Inscriptions around the outer edge read “Women Airforce Service Pilots” and the dates “1942-1944”. The obverse was designed by Joel Iskowitz and sculpted by Phebe Hemphill.

The reverse depicts three aircraft in flight, the AT-6, B-26, and P-51 with WASP wings at the base of the design. Inscriptions read “The First Women in History to Fly American Military Aircraft”, “Act of Congress”, and the date “2009”. The reverse was designed and sculpted by Don Everhart.