The British Royal Mint has issued a new coin honoring the 70th anniversary of the Premiership of Winston Churchill, which began in May 1940. The coin is part of an ongoing series of £5 crowns which make up the “Celebration of Britain” series, issued in conjunction with the 2012 London Olympiad. 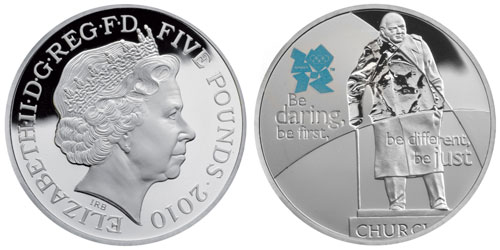 The coin features Sir Winston Churchill as captured by the Ivor Roberts-Jones bronze statue now standing in the grounds of Parliament Square. The inscription reads “Be daring, be first, be different, be just.” This quote by late British businesswoman, human rights activist and environmental campaigner Dame Anita Roddick was chosen to refer to the qualities needed to be successful, reflecting on both Churchill and the Olympic Games.

The obverse of the coin carries an image of Her Majesty Queen Elizabeth II.

The Winston Churchill £5 Crown is issued as both a silver proof and FDC cupro-nickel £5 crown. The silver example carries a color application of the 2012 London Olympic logo on the reverse and is struck in .925 silver with a diameter of 38.6 mm and weighs 28.28 grams.

For more information on this ongoing series and ordering, please visit the website of the Royal Mint at: www.royalmint.co.uk or www.royalmint.com for worldwide enquiries.