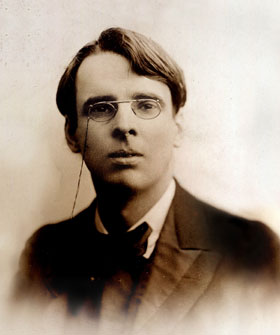 The Central Bank of Ireland have announced that a new silver coin will be issued in honor of one of the country’s most well-remembered and honored poets and authors, that of William Butler Yeats (1865 – 1939) on this the 150th anniversary of the year of his birth and who is widely considered to be one of the greatest poets  of the twentieth  century. He was one of the leading figures in the Irish Literary Revival and his writing was deeply influenced by Irish mythology and folklore.

Born in Dublin on June 13, 1865, Yeats was the son of a well-known Irish painter, John Butler Yeats. His great, great grandfather Benjamin Yeats married Mary Butler and following their marriage, they kept the name Butler in the family name. Growing up in Sandymount, Ireland he was educated there and in London. The Yeats family also spent their holidays in County Sligo, where his mother’s family lived and it is here where Yeats came to think of the area as his childhood and spiritual home. The Butler Yeats family were highly artistic, his eminently famous brother Jack (1871 – 1957) eventually became an esteemed painter in the footsteps of their father, while his sisters Elizabeth and Susan Mary became involved in the Arts and Crafts Movement.

As a young member of the former Protestant Ascendancy movement, a political, economic and social domination of Ireland by a minority of great landowners, it was said he was a supporter of their activities during a crisis of identity. While his family was broadly supportive of the changes Ireland was experiencing, which included the nationalist revival of the late 19th century. Yeats’s childhood and young adulthood were shadowed by the power shift away from the minority Protestant Ascendancy. The 1880’s also saw the rise of Charles Stuart Parnell (1846 – 1891) a nationalist political leader and the home rule movement. The 1890s saw the momentum of nationalism, while the Catholics became prominent around the turn of the century. These developments had a profound effect on his poetry, and his subsequent explorations of Irish identity had a significant influence on the creation of his country’s biography. In 1889, “The Wanderings of Oisin” was published which is based on the lyrics of the Fenian Cycle of Irish mythology and displays the influence of both Sir Samuel Ferguson and the Pre-Raphaelite poets. The poem took two years to complete and was one of the few works from this period that Yeats did not disown in his maturity.

Promoting Ireland’s native heritage, a truly renaissance man of his time, he became an important cultural leader, a major playwright and is remembered as one of the founders of the famous Abbey Theatre in Dublin as well as one of the greatest poets of the century.

In 1899, Yeats, Lady Gregory, Edward Martyn and George Moore established the Irish Literary Theatre for the purpose of performing Irish and Celtic plays. The ideals behind the founding of the Abbey theatre in 1904 were derived from the avant-garde French theatre, which sought to express the “ascendancy of the playwright rather than the actor-manager.

In December 1923, Yeats was awarded the Nobel Prize in Literature, “for his always inspired poetry, which in a highly artistic form gives expression to the spirit of a whole nation” Yeats was aware of the symbolic value of an Irish winner so soon after Ireland had gained independence, and sought to highlight the fact at each available opportunity. His reply to the many letters of congratulations sent to him contained the words: “I consider that this honour has come to me less as an individual than as a representative of Irish literature, it is part of Europe’s welcome to the Free State.”

An Irish Nationalist at heart, Yeats sheltered much of his revolutionary spirit and distanced himself from the intense political landscape until 1922, when he was appointed Senator for the newly established Irish Free State. He was a member of the Irish Republican Brotherhood but due to the escalating tension of the political scene, he distanced himself from the core political activism in the midst of the Easter Rising in 1916, even holding back his poetry which was inspired by those events until 1920. Yeats remained a Senator for two terms, retiring from political life in 1928. In 1916, Yeats, now 51 years old was determined to marry in order to produce an heir.

By September 1917 Yeats proposed to 25-year-old Georgie Hyde-Lees (1892–1968), known as George, whom he had met through a mutual friend. Hyde-Lees accepted, and the two were married on 20 October after a short engagement. Their marriage was a success, and in spite of the age difference, the couple went on to have two children, Anne and Michael who himself also served in the Irish Senate. During 1929, he stayed in County Galway on the west coast of Ireland where he had his summer home since 1919 for the last time. Much of the remainder of his life was lived outside of Ireland, although he did lease a house in a Dublin suburb in 1932. Thereafter, he wrote prolifically through his final years, and published poetry, plays, and prose. In 1938, he attended the Abbey for the final time to see the premier of his play Purgatory. His Autobiographies of William Butler Yeats was published that same year. Yeats died at the Hôtel Idéal Séjour, in Menton, France, on the 28th January 1939. He was buried after a discreet and private funeral at Roquebrune-Cap-Martin, a French commune between Monaco and Menton. His express wish was that he be buried quickly in France with a minimum of fuss but according to his wife, he also expressed a wish to be later interred in Sligo. So, In September 1948, Yeats’ body was moved to Drumcliff, County Sligo, on the Irish Naval Service corvette LÉ Macha where he was eventually laid to rest in the local cemetery.

“Designs in connection with postage stamps and coinage may be described, I think, as the silent ambassadors on national taste.”
–William Butler Yeats 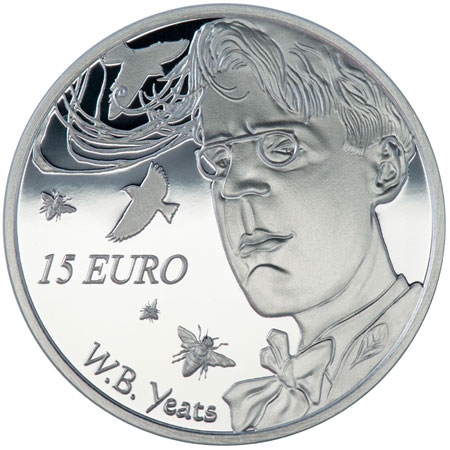 The coin, struck by the Pobjoy Mint UK, on behalf of the Central Bank is designed by artist/sculptor Mary Gregoriy. Her most recent work for the Central Bank includes the 2014 silver coin issued in the “Irish Science & Inventions series which honored John Philip Holland (1841 – 1914) as well as the 2013 silver coin issued in honor of James Joyce which was the winning design in the 2014 Coin of the year awards. The Yeats design includes a representation of Yeats as he was seen in his younger years with his distinctive spectacles perched upon the bridge of his nose and facing towards the left. The denomination of “15 EURO” is placed to the left of the portrait. 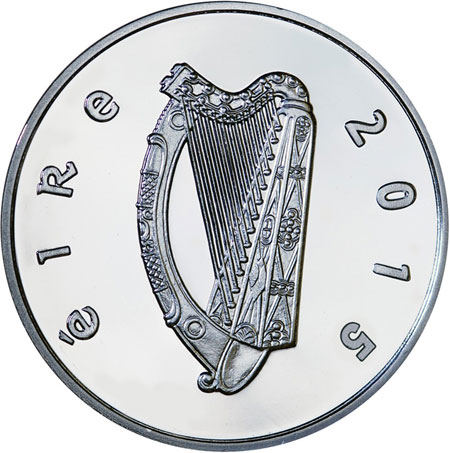 The reverse includes the harp, insignia of the Irish Republic along with the year of issue “2015” and text “EIRE” on either side of the harp.

The coin will officially be launched on the 3rd June – Michael Alexander of the London Banknote and Monetary Research Centre will be attending the launch and will include coverage of the launch with images and interviews on the day.

The coin will thereafter be available directly from the Central Bank of Ireland by visiting their website at: http://www.centralbank.ie/paycurr/collector/Pages/Coinsets.aspx Information offered in English, international orders dispatched.