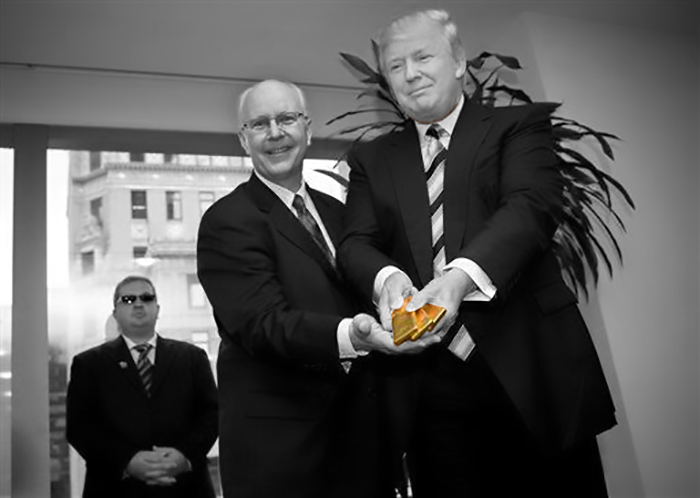 Donald Trump has been interested in gold for decades and once reportedly accepted rent payment in gold bars when APMEX was opening a New York branch back in 2011 (see photo above, or scroll down for video). He also bought a large quantity of gold for about $185 an ounce when gold ownership was legalized in 1975, and sold at just under $800 an ounce years later.

Trump has expressed qualified support for the idea of returning to the gold standard but has not backed any specific plan to do so. For example, during the 2016 presidential campaign he told GQ magazine: “Bringing back the gold standard would be very hard to do, but boy would it be wonderful. We’d have a standard on which to base our money.”

Prior to his election on November 8, 2016, most gold experts predicted a sharp rise in the price of gold and a big decline in stocks if he were elected, mainly because of all the uncertainty surrounding his possible economic policies, including the potential for a trade war if he were to follow through with his suggestions for import tariffs (the border adjustment tax).

As investors know, markets hate uncertainty, and Trump seemed (and still seems) to represent the potential for a whole lot of it. For example, Metals Focus, which provides data to the World Gold Council, said just ahead of Trump’s January 20 inauguration: “While Trump’s victory is still, on balance, seen as positive towards U.S. growth, we believe that eventually the new President’s ‘wild card’ approach will proliferate global uncertainties. This will in turn boost safe-haven demand. Finally, in our view there remain significant risks of equity market corrections.”

(Above: Donald Trump accepts gold bullion, rather than cash, as lease payment.)

Sure enough, as soon as he won late on the night of the 8th, spot gold prices rallied over $80 while Dow futures dropped 800 points. The gold rally was short-lived, and the experts turned out to be wrong, at least for a while. Gold began declining from that time, hitting a low in mid-December of $1,128, when it began rising again—as it has mostly done since then, now up around $100 compared the start of the year (or about $120 compared to the December low).

And in case you missed it, while gold was declining after the election, in 2016 gold prices were actually up 8.6% and gold-miner stocks were up an impressive 55%, beating out all other asset classes.*

Gold has continued to perform well even in the face of daily stock-market records, something that is not seen often and that is viewed as a very bullish sign. The key reasons for this development, according to gold analysts, are: rising inflation, negative real interest rates, the potential for much higher federal deficit and debt levels in the future, and even the prospect of another debt-ceiling debacle. (The current level is only valid through mid-March, at which point either it must be increased legislatively, or the Treasury must begin what it calls “extraordinary measures.”)

It should be noted that gold hit its all-time nominal high of $1,923 in September 2011, not long after a deal in Congress to raise the debt level after the ceiling was temporarily breached, which resulted in a downgrading of the U.S. credit rating by one of the major rating agencies. Not to mention that the temporary default in 2011 added $1.3 billion to the cost of servicing the debt just that year, and much more over time.

Regarding inflation, which had remained low in recent years, former Federal Reserve chairman Alan Greenspan said recently that the risk of inflation is starting to rise because an unemployment rate below 5% has put upward pressure on wages, which did start rising in 2016, and unit costs in general.

And inflation expectations as well as the inflation rate have been moving up recently with the rate for the year ending in January being 2.5%. Jim Nichols, long-time gold expert and managing director of American Precious Metal Advisors, said on February 17: “In my view, an accelerating U.S. consumer-price inflation rate will outpace any increase in nominal rates brought about by the Fed—a trend that will contribute to record high gold prices in the next few years.”

Rising interest rates are associated in some people’s minds with lower gold prices, but what really matters is not nominal rates but the real rate after factoring in inflation, which has been falling even with the 25-basis-point rate increase last December. They would still be negative if, as widely expected, rates were increased in March by a similar amount. In such an environment, gold is a useful asset to own since there is not the usual opportunity cost of owning it compared to bonds and cash that pay dividends when real rates are positive.


It is true the Fed has indicated it may raise rates three times over the course of 2017, provided economic growth picks up and is not derailed by import tariffs or other disruptive factors, which would also push inflation up since the cost of the tariffs is ultimately paid by consumers in the form of higher prices.

But depending on how much inflation actually picks up, the planned rate increases will probably not be able to hold inflation back because of time lags, which typically run six to nine months from the time rates are increased until they have an impact.

The other key factor, which remains a wild card for the moment, is how the economic policies of the Trump administration will impact the levels of the federal debt and deficit over the coming years. It is certainly possible that growth will pick up, as President Trump has suggested, but his aggressive and expansionary economic approach is widely expected to raise federal government spending by a very large amount between the infrastructure plan, the planned boost in military spending, and pledges not to cut entitlements. And that will be coupled with large planned tax cuts, which will reduce federal revenue. Not to mention the cost of the border wall and the planned repeal and replacement of Obamacare, which is also likely to be very expensive, according to the nonpartisan Congressional Budget Office.

It is true that higher growth would boost tax revenues and that there are plans to slash spending in other areas, but those factors are unlikely to be enough to offset all that increased spending—especially since economists believe that substantially higher growth would require either a larger population or higher productivity rates, which have been lagging in recent years, and that the programs being cut amount to a very small percentage of the budget.

With the debt already close to $20 trillion (having doubled in the past decade) and interest rates rising, the cost of simply servicing the debt could soon reach levels that would force severe cuts in all other government spending and entitlements, especially if the planned tax cuts and infrastructure programs further ballooned the debt by trillions more as expected. The nonpartisan Tax Foundation estimates that even with higher growth, Trump’s tax plan would add between $2.6 and $3.9 trillion to the debt, and the real amount could be double or more those amounts, if optimistic growth projections do not work out.

Over time, such debt levels could simply become unsustainable, especially with higher interest rates, which would have all kinds of repercussions such as the dollar losing its reserve currency status, and even a possible devaluation of the dollar or other steps to prevent a default or worse.**

As of the time of writing, President Trump has not yet set forth any specific policy proposals in the form of legislation to be taken up by Congress, and only a few details of the proposed budget blueprint have trickled out. So it remains to be seen what actually happens given all the unknown variables.

But for the reasons discussed above, there is a rather broad consensus among gold watchers that spot levels in 2017 should reach at least $1,300–$1,350. Some, such as Mr. Nichols and Mr. Stuppler, see it going much higher, perhaps even reaching or surpassing the level last seen in 2011—especially if there is another debt-ceiling crisis or a substantial increase in the federal debt and deficit and in inflation.

At the same time, the economic analysis that underpins this argument is only part of the story. There are also plenty of other reasons to be bullish about gold’s prospects. These include:

None of this means gold is destined to keep going up or that it will hit a new high anytime soon, to be sure; but taking all these factors into account, it is difficult not to be bullish about the prospects for gold based on what we know today about the economy and the Trump administration’s policies.   ❑

Louis Golino is an award-winning numismatic journalist and writer specializing on modern U.S. and world coins. His work has appeared in Coin World, Coin Week, The Numismatist, Numismatic News, and COINage, among other publications. His first coin-writing position was with Coin Update.

This post was corrected on March 8, 2017. Original text in the eighth paragraph referenced an “all-time nominal high of $1,923 in August 2011, just days after a deal in Congress…” The passage was revised to read “all-time nominal high of $1,923 in September 2011, not long after a deal in Congress…” Our thanks to Dwight for this correction.