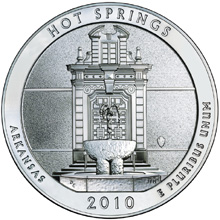 Although President Obama and congressional Republicans continue to negotiate an end to their impasse over last year’s fiscal budget, the possibility of a federal government shutdown starting April 9 continues to loom large. And even if this shutdown is averted, even bigger battles lie ahead about the 2012 budget and increasing the federal debt limit, and there could be other shutdowns in the months ahead.

Many coin collectors are interested in how a possible government shutdown would affect the operations of the U.S. Mint. They are especially interested in knowing whether it would delay the planned April 28 release of the numismatic version of the 2010 Hot Springs America the Beautiful five ounce silver coin.

After waiting months to find out when the first numismatic version would be released, collectors would be very disappointed by a further delay of this release. Some collectors are also not happy that the coins will be released one at a time rather than sold as a set as the 2010 bullion versions were sold by the nine Authorized Purchasers, whereas others are pleased they will be able to purchase them individually.

Normally during a government shutdown some employees are designated as essential, and they continue to work as normal and are paid for that work once the shutdown is over. Those employees who do have to report to work would eventually be paid once a budget agreement is finally reached.

However, a large number of federal employees, in this case an estimated 800,000 people, would be furloughed rather than designated as essential. Those employees would not report to work, would actually be legally prohibited from entering their offices, or even reading their e-mail on a government computer, and may not be reimbursed for the period when they could not work as they were during the last shutdown.

The U.S. Treasury department, according to a lapsed appropriations contingency plan posted online on April 8 (http://www.treasury.gov/connect/blog/Pages/lapse-in-appropriations.aspx), plans to furlough 92,000 of its 127,000 employees. 35,000 employees will be designated as essential employees. That includes employees who will be on hand to process tax returns as well as employees whose salaries are not funded through the federal budget.

The U.S. Mint is one of those Treasury entities not funded through annual appropriations, so the Mint would actually continue to operate as if there were no shutdown. Instead of being part of the regular federal budget, the Mint is a Public Enterprise Fund. That fund is financed through the sale of U.S. Mint coins – circulating, bullion, and numismatic. Since the Mint is self-funded through those coin sales, operations would continue as normal. Coins will continue to be minted, bullion coins will be sold as usual, and numismatic orders should be processed as normal.

This past February the federal government was also making preparations for a possible government shutdown, as a continuing budget resolution was about to expire on March 4. On February 23 Dan Riordan, the Mint’s acting director for workforce solutions notified Mint employees that they would all be required to report to work in the event of a shutdown. He issued a statement saying the Mint “will continue to manage its operations and programs as usual.”

The possible shutdown that may begin on Saturday, April 9 should therefore not have any impact on the Mint, including numismatic sales. The U.S. Mint operates six facilities – the Washington, DC headquarters, branch Mints in Denver, Philadelphia, San Francisco, and West Point, and Fort Knox. Employees at each of them will be reporting to work as usual if there is a shutdown.

So coin collectors now have one less concern to worry about.