This week the United States Mint began sales of the 2010 Boy Scouts of America Centennial Silver Dollar. Ever since the final designs for the coin were officially unveiled, there have been frequent comments and questions about the female, which appears on the obverse of the coin. Specifically, many have asked: Why is there a girl on the Boy Scouts coin? 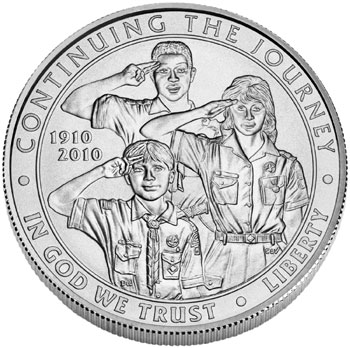 The 2010 Boy Scouts Silver Dollar obverse features a Boy Scout, Cub Scout, and female Venturer saluting with the inscription “Continuing the Journey” above and centennial dates “1910” and “2010” to the side. Additional inscriptions “In God We Trust” and “Liberty” appear below.

The Venturing program, which began in 1998, allows both male and female members, aged 14 to 21. According to information from the literature and press releases for the commemorative coin, the inclusion of the female Venturer is intended to reflect the diversity of the nation and the evolution of the Boy Scouts organization.

This design represents the Boy Scouts of America of today, as the organization has recognized the need to include other programs for younger boys (cub scouts) and older boys and girls (venturers), reflecting the great diversity of our nation.   It is a dramatic representation of how the Boy Scouts of America has evolved over the past century to form a strong foundation of leadership, service, and community for all the youth of America.

Officially, Public Law 110-363 requires the design of the Boy Scouts coins to be “emblematic of the 100 years of the largest youth organization in the United States, the Boy Scouts of America.” The only required inscriptions are value of the coin, the year “2010”, and the words “Liberty”, “In God We Trust”, “United States of America”, and “E Pluribus Unum”.

The final design was selected by the United States Treasury Secretary, following consultation with the Commission of Fine Arts (CFA), the Chief Scout Executive of the Boy Scouts of America, and review by the Citizens Coinage Advisory Committee (CCAC).

Originally, seventeen different obverse design candidates prepared by the United States Mint, which focused on two distinct themes. Five candidate designs included portraits of three scouts to represent the diversity of the three major divisions of Scouting. The remaining twelve design candidates relate present-day scouts to their 1910 counterparts to represent the continuity of the scouting tradition.

The official recommendations and some the related discussions of the CFA and CCAC are known to the public. The minutes of the CFA meeting also shed some light into the preference of the Boy Scouts of America, which seem to have played a big role in the final selection.

While the CFA was discussing the two different design themes, a representative of the US Mint indicated that the Boy Scouts of America has supported both themes, but after reviewing the design candidates their “top preferences” were designs showing the modern diversity. However, the organization would not make its final recommendation until considering the advice of the CFA and CCAC.

After additional discussion, the CFA Vice-Chairman summarized the CFA’s support of a design depicting a scout and adviser on a rock ledge, but noted their concern that the design would not be acceptable compared to diversity themed designs. It seems that it was on this basis that the CFA offered two design recommendations, the scout and adviser on a rock ledge and the design featuring three scouts saluting (Cub Scout, Boy Scout, and female Venturer).

Fewer details are available regarding the specific discussions of the CCAC. They recommended a design depicting a 1910 scout offering a helping hand to a modern scout and commented, “CCAC members appreciated the theme of this motif, which shows the spirit of giving that is so important in scouting, and also admired the effectiveness of its composition and the design’s sense of motion.”

The candidate designs recommended by the CFA and CCAC which were not selected are shown below. 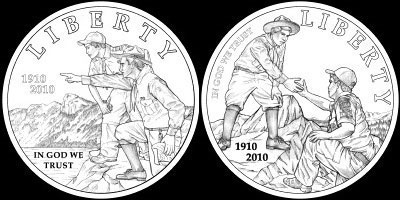 Despite the mixed opinions on the design, early indications suggest strong opening sales for the Boy Scouts of America Centennial Silver Dollars. The maximum authorized mintage for the coins is 350,000, which seems like a small amount when compared to the US Mint’s audience of commemorative coin collectors and the potential interest from millions of current and former Boy Scouts, parents, guardians, and others associated with the organization.