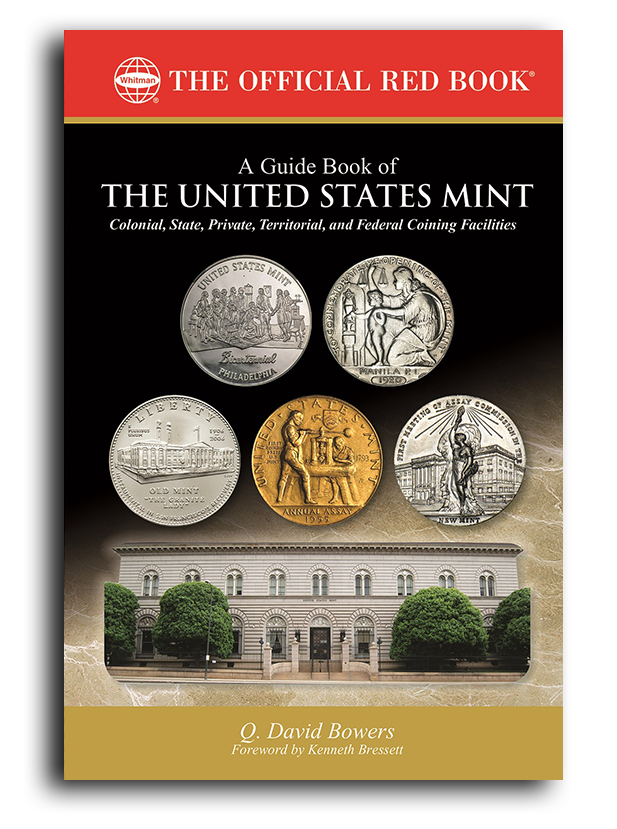 Whitman Publishing announces the release of A Guide Book of the United States Mint, by Q. David Bowers. The 448-page softcover book is available from booksellers and hobby shops nationwide, and online (including at Whitman’s website), for $24.95. (Note that, on cyber-Monday, Whitman has a site-wide, one-time discount code, GIVING, for 30% off your entire order. This includes the new Guide Book; coins and Red Book Online are not included.)

The 23rd volume in the award-winning Bowers Series explores the heart of American coin collecting: the United States Mint itself, which is gearing up to celebrate its 225th anniversary in 2017 with special coins and medals.

The U.S. Mint is the official source of the material that numismatists collect, study, and catalog. It is the sole manufacturer of the nation’s legal-tender coinage and national medals, and its products are used every day by millions of Americans nationwide. As a federal repository its facilities safeguard more than $300 billion in national assets. It employs nearly 2,000 people, including its own police force.

Bowers’s new book unearths a treasure trove of numismatic knowledge, including the history of the Philadelphia Mint and every Mint branch, plus colonial, state, private, and territorial mints; information on historical and modern minting procedures; a study and price guide of historic medals and collectibles commemorating the Mint; data on every director of the Mint and superintendents for every branch; and illustrated behind-the-scenes looks at the modern Mint and its facilities. The text is illustrated by nearly 1,300 photographs, engravings, diagrams, blueprints, and other images.

Chapters cover: early American money and commerce; early mints in British North America (e.g., colonial Massachusetts and Connecticut) and the post–Revolutionary War states; the first federal coinage; the Philadelphia Mint; the New Orleans Mint; the Charlotte Mint; the Dahlonega Mint; the San Francisco Mint; the Carson City Mint; the Denver Mint; the West Point Mint; the Manila Mint in the Philippines; and private and territorial mints such as those of Templeton Reid, the Bechtler family, and many issuers of California and Colorado gold pieces. Chapter 13 covers “Mints That Never Were”—the Cincinnati Mining & Trading Company, the Dalles Mint in Oregon, LeRoy Henning’s nickel-counterfeiting operation in New Jersey, and others.

“Dave Bowers takes you on a ‘you are there’ experience with over three dozen mints,” writes Kenneth Bressett in the book’s foreword. “I know you will enjoy this delightful narrative!”