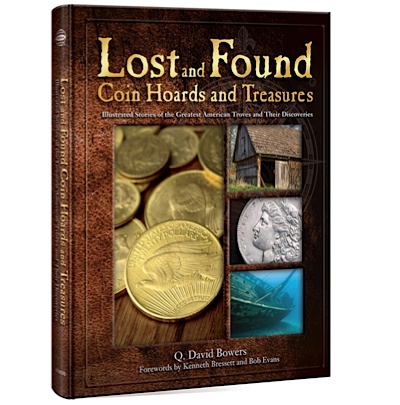 Whitman Publishing has shared the following release regarding its upcoming publication, Lost and Found Coin Hoards and Treasures:

(Atlanta, Georgia) — Whitman Publishing announces the release of Lost and Found Coin Hoards and Treasures: Illustrated Stories of the Greatest American Troves and Their Discoveries, by Q. David Bowers. The 480-page hardcover book will debut on October 27, 2015. It is available from booksellers and hobby shops nationwide, and online (including at www.Whitman.com), for $39.95. The book can also be borrowed for free as a benefit of membership in the American Numismatic Association, through the Dwight N. Manley Numismatic Library.

Lost and Found Coin Hoards and Treasures details the most significant finds of American coins from the colonial period to the modern day. Whether the accumulations were created intentionally (perhaps by a miser who distrusted banks, or by a savvy numismatist) or unintentionally (buried by thieves but never dug up, or lost in a tragedy at sea), their remarkable discoveries will interest coin collectors, treasure-seekers, and everyone else who enjoys tales of lost fortunes that are found again.

Q. David Bowers is one of America’s master storytellers. “My new book shines light on the most dramatic and unusual American coin hoards and treasures,” he said. “You will be astounded by their stories, and might be inspired to do some hunting of your own.”

“Many treasures have already been found; many others are waiting for someone to find them,” said Whitman publisher Dennis Tucker, who also notes that every story inside the book is true. “Bowers shares tales of treasure from sunken ships, bank vaults and reserves, hidden compartments, buried chests and boxes, hiding places of pirates and privateers, old cornerstones, barrels and casks, U.S. Mint storage, wrecked buildings, caves and crevices, ancient estates, dusty time capsules, forgotten collections, attics, basements, and other lost and hidden places.”

Bowers gives rich historical context for every find. Some of the personalities he introduces are quirky, like coin hoarder Alexander Miller, who lived in a tiny town in Vermont, rarely spoke with the outside world, and also collected airplane parts and vintage cars. Some are courageous, like Captain William Lewis Herndon, who went down with the hurricane-stricken treasure ship SS Central America after evacuating the women and children.

Lost and Found Coin Hoards and Treasures also includes a state-by-state listing of treasures waiting to be found; a detailed review of the Great Treasury Hoard for Morgan dollar collectors; a chronological listing of notable shipwrecks yet to be salvaged; and an examination of 26 hoaxes, fantasies, and questionable finds. The book is richly illustrated with more than 600 full-color images. Bowers inventories the Donner Party find, the Cogswell time capsule, the Massachusetts State House cornerstone, the hoard of miser Aaron White, the Baltimore Hoard of gold coins, the wrecks of numerous treasure-laden ships, and many dozens of other finds.