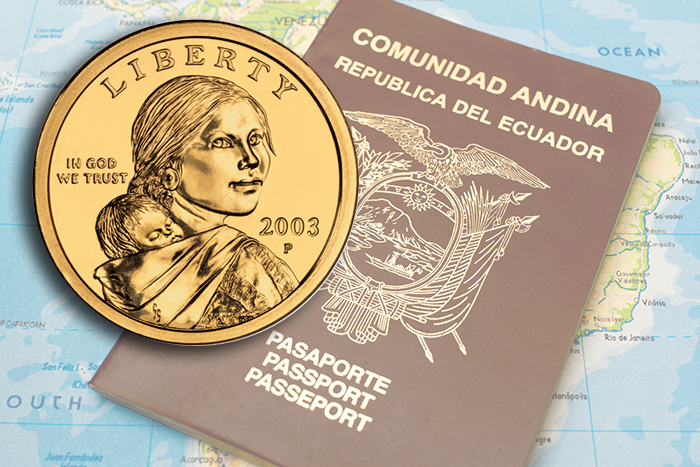 Despite its best efforts, the U.S. Mint has never been able to sell the general public on the one-dollar coin. The Susan B. Anthony dollars, which too closely resembled quarters, were hated; the Sacagawea dollars were a brief novelty; and the Presidential dollars enjoyed just part of their run as circulating coins. Since 2012, Sacagawea and Presidential dollars have been struck as numismatic items rather than being issued for general circulation.

But there’s one place, according to the Miami Herald, where the Sacagawea dollar is not only liked, but preferred: Ecuador.

Seventeen years ago, Ecuador experienced the economic equivalent of a tsunami. The value of the nation’s currency, the sucre (which had been in use since 1884), was plummeting. In 1970, 25 sucre bought one U.S. dollar, but the rate began to fall in the eighties; by 1990, the rate was more than 800 sucre per dollar—and by 1995, almost 3,000 per dollar. By January 2000, the rate had slipped to a staggering 25,000 per dollar; it was at that point that Ecuador adopted the American dollar as its official currency.

The Herald reports that, since 2002, the U.S. Mint has shipped nearly 150 million $1 coins, in both the Presidential and Sacagawea designs, to Ecuador. The coins, whose heft gives them a tangible feel of value, are widely preferred to American dollar bills. In interviews with Ecuadorian citizens, the Herald found a cafe worker who brings in about $120 per day, yet sees a paper dollar maybe once per week. A taxi driver with an ashtray full of Sacagawea dollars said that if he received a dollar bill, he would get rid of it as quickly as possible.

An interesting aspect of the story is that, of all the $1 coin designs, the Sacagawea dollar resonates with Ecuadorians the most. Much of the population has indigenous roots, and the image of a native woman with a baby strapped on her back is familiar and comforting. One Ecuadorian woman, Luzmila Mita, said that she’d long believed the person on the coin was “one of us,” and that “it took me a long time to know she was from up there.”   ❑