Following in the footsteps of the immensely successful “Ram Dollar” issued last year, The Royal Australian Mint have launched (1st January) the second in a series of historical designs from Australia’s colorful numismatic past. In an effort to highlight one of the Country’s most important industries, that of wheat production (Australia is the currently the 9th largest producer of wheat world-wide), the design chosen is the previous three pence silver coin which was issued from 1938 to 1964. 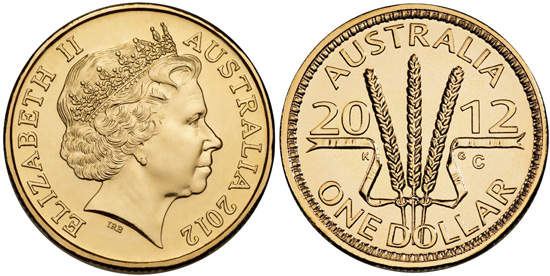 The “wheat sheaf” design, originally created by the renowned artist George Kruger Gray (1880 – 1943), consists of three stalks of wheat with a ribbon encircling the stem of each stalk and stretching under both of the two digit year date on either side of the primary design. The obverse of the coin bears the familiar effigy of H.M. Queen Elizabeth II sculpted by engraver Ian Rank-Broadley and used on Australian circulation coins since 1998. 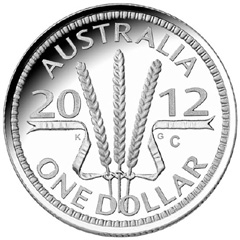 Two versions of the coin were minted, a silver proof coin for collectors and an aluminum-bronze dollar coin struck in brilliant uncirculated quality with a weight of 9 grams and a diameter of 25 mm. This collectible coin was certified as the first coins struck by the Royal Australian Mint for 2012 for the first 100 visitors to the RAM having begun production at midnight on the 1st January. The collectible coins all bear a ‘C’ for Canberra mark, which shows that they were made on the visitors press at the Mint in Canberra.