Warren G. Harding was our 29th President. He was the first President to visit Canada, and signed a separate peace treaty with Germany and Austria, as Congress had rejected the Treaty of Versailles. His cabinet was a mixture of the “best minds” of the country, along with his friends and political contributors, resulting in mixed results in dealing with corruption. His untimely death in August 1923 propelled Calvin Coolidge to the top office. His widow oversaw the preservation of her husband’s legacy by burning correspondence, documents, and personal papers, save a few held from the public by the Harding Memorial Association. 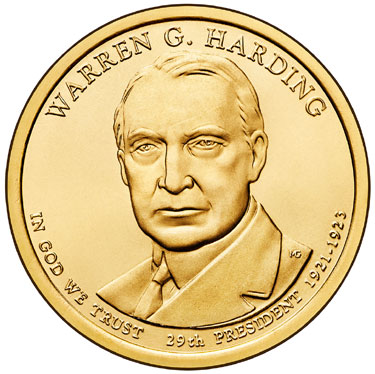 The coin bearing President Harding’s image is the twenty-ninth in the series of Presidential Dollar coins, and the first to be issued in 2014. The obverses depicts Harding, the time in office (1921-1923), and the motto “In God We Trust”. The reverse shows the Statue of Liberty in the same design as been depicted on all Presidential dollars. The edge has the motto “E PLURIBUS UNUM”, the year of issuance, and the mint mark.

The Warren G. Harding Presidential Dollar will be released on February 6, 2014 at 12:00 noon EST. As Presidential Dollar coins are still being produced under the Treasury Department’s suspension of production of the dollar coin for general circulation, they will only be available directly from the U.S. Mint in the following products: