The Walton Specimen 1913 Liberty Head Nickel is being publicly displayed by Heritage Auctions at the Florida United Numismatists (FUN) convention in Orlando, January 10 – 12, 2013. This fabled, century-old rarity was recovered from a fatal car crash and then unsuspectingly kept in a Virginia closet for 41 years because it was believed to be a fake.

“It’s one of America’s most famous rare coins, one of only five known, genuine 1913-dated Liberty Head nickels.  This particular one was off the radar for decades until it literally came out of the closet after a nationwide search and was authenticated by experts in 2003,” said Todd Imhof, Executive Vice President of Heritage Auctions of Dallas, Texas. 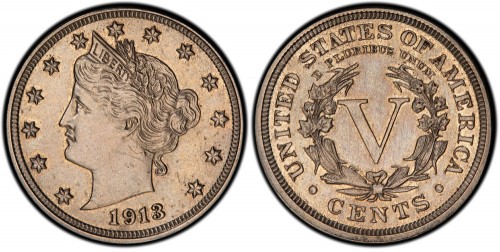 The historic nickel is being exhibited by Heritage on behalf of Walton’s heirs at FUN and then will be displayed at the Long Beach, California Coin, Stamp & Sports Collectible Expo, February 7 – 9, and the Whitman Baltimore Coin & Currency Expo, March 14- 17.  It then will be offered on April 25 as one of the highlights of a rare coin and currency public auction conducted that week by Heritage in Schaumburg, Illinois.

Why were only five of these coins made a century ago? In 1913, the United States Mint switched designs on five-cent denomination coins, going from a depiction of a symbolic “Miss Liberty” to a new design featuring a native American Indian on the front and a bison (“buffalo”) on the back.

“Five nickels with the old Liberty Head design but dated 1913 were struck under mysterious circumstances at the Philadelphia Mint. Their existence was not known until the five coins appeared at the American Numismatic Association convention in Chicago in 1920.  Now we’re bringing this coin back to the Chicago area for its auction and it’s expected to sell for $2.5 million or more,” said Imhof.

This 1913 Liberty nickel was consigned by the heirs of George O. Walton, a North Carolina collector who acquired the coin in the mid 1940s for a reported $3,750.  He had it with him when he was killed in a car crash on March 9, 1962.  Newspaper reports of the accident recounted how law enforcement officers retrieved hundreds of coins scattered from the crash, including the 1913 Liberty nickel still in the custom-made plastic holder Walton kept it in.

“She kept the nickel in a box with family items in the closet, and it stayed there for four decades,” recalled Givens.

Cheryl Myers, one of Givens’ sisters, explained:  “Our Mother believed the initial evaluation that it had been altered, but she adamantly believed her brother had a real one (1913 Liberty Head nickel) and she continued to look for it.  She kept the ‘altered’ coin probably out of sentiment and probably out of the fact that it was made in 1913, her birth year.”

Following an Associated Press story in May 2003 about a minimum $1 million reward for the accounted for nickel, Walton’s heirs arranged to take the coin in July 2003 to the American Numismatic Association World’s Fair of Money in Baltimore Maryland.  The four other surviving 1913 Liberty nickels were scheduled to be exhibited at the convention.

In a secret midnight meeting in a security room at the Baltimore Convention Center, a team of rare coin experts assembled by Collectors Universe, Inc., the company offering the reward, examined the Walton coin and carefully compared it to the four other specimens, including one from the Smithsonian Institution.  After 40 minutes, they unanimously agreed the Walton nickel was the long-missing fifth coin.

Why was the Walton nickel suspected of being fake in 1962?  Authenticators said a small imperfection in the metal under the coin’s date may have raised suspicion that the date was altered; however, the other four genuine 1913 Liberty nickels also have tiny metal defects elsewhere on their surfaces.

Following its authentication in 2003 Walton’s 1913 Liberty nickel was on loan from the heirs to the American Numismatic Association Money Museum in Colorado Springs, Colorado and was publicly exhibited nationwide.