Hawai’i Volcanoes National Park, located on the island of Hawaiʻi, also known as ‘The Big Island’, in the state of the same name, encompasses two active volcanoes: Kīlauea, one of the world’s most active volcanoes, and Mauna Loa, the world’s most massive volcano. The park was established in 1916, and was designated as an International Biosphere Reserve in 1980 and a World Heritage Site seven years later. In 2000, the name was changed by the Hawaiian National Park Language Correction Act of 2000 to observe the Hawaiian spelling. 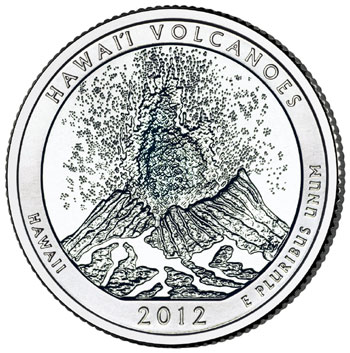 The Volcanoes National Park Quarter depicts an erupting volcano. Also included in the design are the incused phrases “Hawai’i Volcanoes”, “Hawaii”, and “E Pluribus Unum”, as well as the date of issue. The coin will represent the fourth issue of the United States Mint’s America the Beautiful Quarters Program for 2012.

An official launch ceremony for the coin will be held on August 29, 2012, 1:30 PM (Hawaii Time) at Kahua Hula, south of the Kilauea Visitor Center of the park. The ceremony will be attended by Daniel Inouye, United States Senator; David Croft, Plant Manager of the Denver Mint; Cindy Orlando, Superintendent of the park; and Stephanie Donoho, Tourism Specialist, Country of Hawaii. The ceremony will be followed by a coin exchange, where the public can exchange cash for $10 rolls of newly minted Hawai’i Volcanoes National Park Quarters at face value.

The quarters will be available from the U.S. Mint in the following products offered by the US Mint: