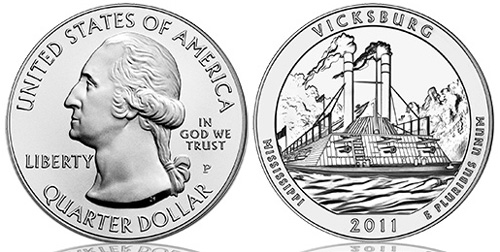 The reverse design of the coin depicts the U.S.S. Cairo on the Yazoo River. The ironclad gunboat is shown as it would have appeared while serving in the Union Navy during the Civil War. Inscriptions around the outer edge include “Vicksburg”, “Mississippi”, “E Pluribus Unum” and “2011″. The reverse was designed by Thomas Cleveland and sculpted by Joseph Menna.

The obverse of the coin carries the John Flanagan portrait of George Washington used for the 1932 Washington Quarter. Inscriptions include “United States of America”, “Liberty”, “In God We Trust”, and “Quarter Dollar”. The edge of each coin includes incuse lettering indicating the weight and fineness “.999 Fine Silver 5.0 Ounce”.

The Vicksburg Five Ounce Silver Uncirculated Coin is limited to a total mintage of 35,000 coins. The US Mint will impose an ordering limit of five coins per household for the first week of release. After this point, the limit will be re-evaluated and either extended, adjusted, or removed.

Each coin is priced at $204.95 plus applicable shipping and handling. Orders may be placed online at http://catalog.usmint.gov.