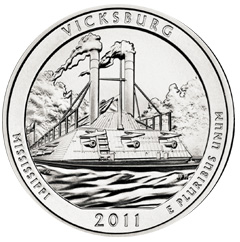 The next release in the America the Beautiful Silver Bullion Coins Program will soon be available. The United States Mint recently announced that they will begin accepting orders from their network of authorized purchasers for the Vicksburg National Park design starting on Monday, June 20, 2011.

This will represent the fourth design released for the current year and the ninth release overall. For 2011, the designs featuring Gettysburg and Glacier National Park were made available on April 25, 2011. This was followed by the design featuring Olympic National Park, available from May 23, 2011.

The silver bullion coin series was introduced last year and features the same designs as the circulating quarter dollars. Each coin contains 5 troy ounces of .999 fine silver and has a diameter of 3 inches. Incused edge lettering indicates the weight, content, and fineness.

As with other United States Mint bullion offerings, the Vicksburg 5 oz. silver bullion coins will be distributed through a network of authorized purchasers. This small group of distributors is able to buy the coins in bulk quantities directly from the United States Mint at a price based on the market price of silver plus a fixed mark up of $9.75 per coin. The market price of silver is determined based on the London Silver Fix price on the first business day following the order. The bullion coins are then resold to other dealers or the public.

The United States Mint has indicated that an initial quantity of 126,700 of the Vicksburg five ounce silver coins will be available. This quantity will be allocated amongst eligible authorized purchasers. This initial quantity matches the number of coins that were made available for the other 2011-dated releases. The 2010-dated releases were significantly more limited, with a quantity of 33,000 available for each design.

The Vicksburg National Military Park Five Ounce Silver Coins feature an image of the U.S.S. Cairo on the Yazoo River, as it would have appeared while serving in the Union Navy during the American Civil War. This was designed by Thomas Cleveland and engraved by Joseph Menna. The obverse features a portrait of George Washington designed by John Flanagan.

The quarter dollars bearing the same design are scheduled to be released into circulation on August 29, 2011. The US Mint plans to offer a numismatic version of the five ounce silver coin later this year, but the release date is not yet known.