Vicksburg National Military Park, located in Mississippi, preserves the site of the American Civil War Battle of Vicksburg, waged from May 18 to July 4, 1863. The park was established on February 21, 1899 and transferred from the War Department to the National Park Service on August 10, 1933. The park also spans into Delta, Louisiana and commemorates the greater Vicksburg campaign, which preceded the siege of the city of Vicksburg. 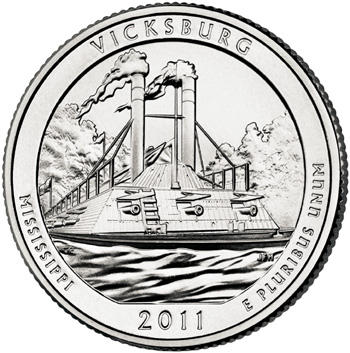 The Vicksburg National Military Park Quarter depicts the U.S.S. Cairo on the Yazoo River, which was sunk on December 12, 1862. Also included in the design are the incused phrases “Vicksburg”, “Mississippi”, and “E Pluribus Unum”, as well as the date of issue. The coin will represent the fourth issue of the United States Mint’s America the Beautiful Quarters Program for 2011.

The official circulation release date for the quarter has been scheduled for August 29, 2011 with a launch ceremony to be held the following day at the USS Cairo Museum, located on the grounds of the park.

The Vicksburg quarter will be available from the U.S. Mint in the following products: