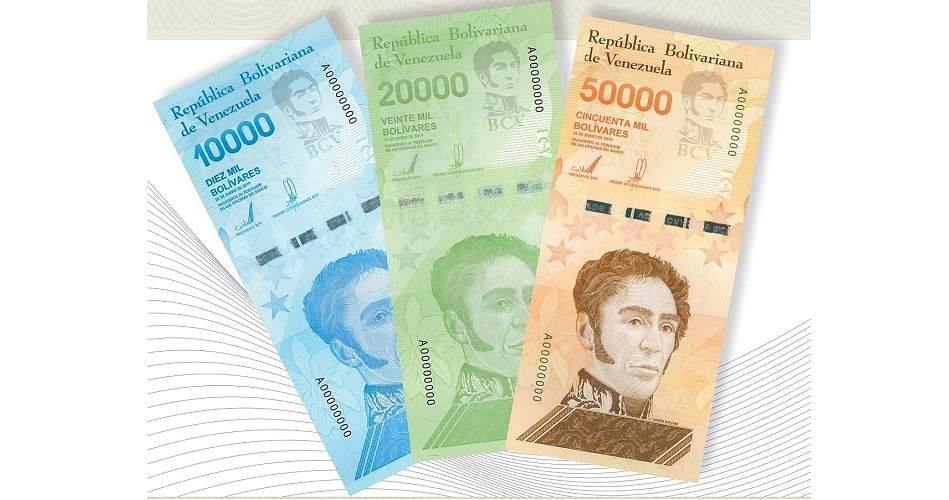 It has been reported that the Banco Central de Venezuela has procured the services of a Russian-based currency production facility for a new supply of bolivar-denominated banknotes. As the economy of Venezuela continues to deteriorate due to stringent policies of government-controlled industry and output, the bolivar currency has spiralled out of control in terms of its value due to inflationary levels so high that the Central Bank has been unable to document its rate accurately. As a result of Venezuela’s hyperinflation, banknotes have had to be introduced into circulation at ever-increasing denominations.

The United States dollar has also become the oil-rich country’s de-facto mode of payment despite the U.S. administration’s applying strict sanctions against the government and the close associates of President Nicholas Maduro’s inner circle. The U.S. administration has made it clear they recognise the leader of the opposition, Juan Guiado, who was appointed as interim head of the country by its National Assembly as the country’s legitimate head of state. As of June 2019, Guaidó is recognised as the acting president of Venezuela by 54 countries worldwide, as well as the majority of OAS member states.

The Banco Central introduced three new denominations of banknotes in June of 2019, which were the 10,000-20,000 and 50,000 bolivares. Currently, these three values represent just 1.3 percent of all bolivar notes in circulation, with the largest banknote denomination in use being equal to 65 U.S. cents. The issue of the three new, larger banknote denominations came just nine months after BCV re-denominated the bolivar currency into the Bolivare sobrano to keep one step ahead of the country’s runaway annual rate of inflation. Initially, the new banknotes were believed to be produced in Venezuela, but with the sanctions in place, their production may no longer be possible. As a result, it has been reported that Goznak, a state-owned money printer in Russia, has been commissioned to print 300 million new bolivar banknotes, also in an effort to bypass the sanctions imposed by the U.S. and other countries.

Previous versions of the bolivar banknotes were initially produced by De la Rue, regarded as the world’s largest producers of banknotes for an assortment of countries, when it was hit hard at the time the Banco Central was unable to pay the 23-million-dollar outstanding debt. The 300-million notes may be worth as much as $143 million, which translates to a small sum in terms of a banknote commission. However, this amount essentially equals only about a fifth of the country’s actual money in circulation. This condition is a result of the years of hyperinflation, which has destroyed the currency’s value domestically and internationally, and which has impoverished millions of Venezuelans whose savings have been eroded to nothing.

For additional information about bolivar notes and coins issued by the Banco Central de Venezuela, please visit their website.