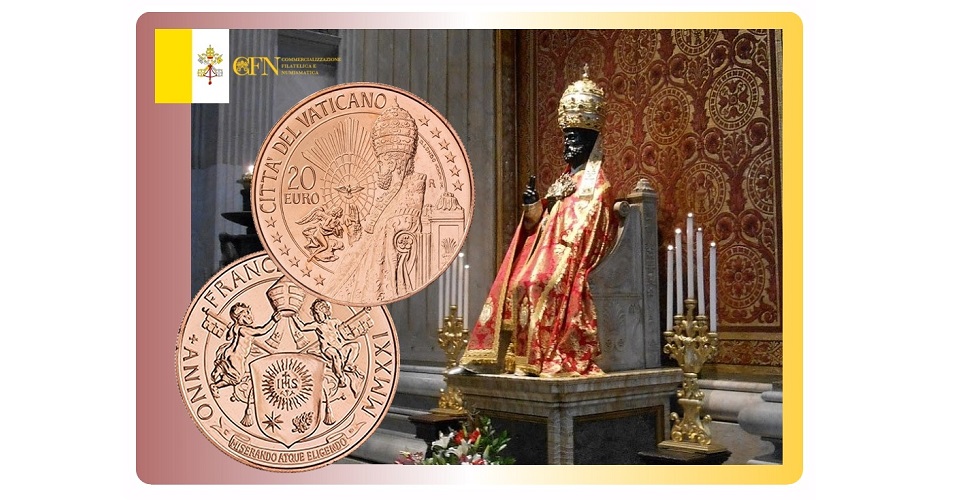 The Vatican City State Mint has announced (3rd May) the issue of the second coin on the theme of “Art and Faith.” This year’s coin depicts the bronze statue of St. Peter in the Vatican, a work by Arnolfo di Cambio (1240-1310 ca). This ancient statue of St. Peter, in all likelihood for the Jubilee of 1300, is placed against the pillar of St. Longinus, above an alabaster base in the Basilica. St. Peter is portrayed seated and offering a blessing while holding the keys to the kingdom of heaven. Behind it, there is what seems to be a fine brocade tapestry, however, it is actually a mosaic. Imitating a brocatello drapery, the mosaic was placed behind the statue in 1871.

Visitors to the Vatican and who pass by the beloved statue will notice the feet are famously worn down; this has occurred over the centuries from the constant kissing and touching by the faithful. When celebratory vestments are not displayed on the statue, St. Peter is sculpted and shown in pontifical robes similar to those formerly worn by the pope during the 14th century.

The coins are produced by the Istituto Poligrafico e Zecca Dello Stato (IPZS) at their facilities in Rome, on behalf of the Vatican City State Mint, and are designed by Daniela Longo. The reverse side of the coin depicts the splendid statue as it would be seen with the papal vestments on the occasion of the Feast of Saints Peter and Paul on the 29th June of each year. In the background, is a representation of the magnificent apsidal stained glass window of St. Peter’s Basilica, which is the work of Gian Lorenzo Bernini. To the left and along the rim is the text CITTA DEL VATICANO and on either side are six, five-pointed stars — 12 in total — representing the European Union. The obverse side includes the crest of HE Pope Francis depicting the papal mitre and crossed keys. The legend FRANCISCUS PP is shown above the crest. The year of issue in Roman numerals ANNO DOMINI MMXXI is placed below along with the text MISERANDO ATQUE ELIGENDO, the Latin motto of His Eminence (“by having mercy, by choosing him”). Pope Francis expressed his wish that papal coins should no longer include his effigy or likeness and have not done so since the issue of Vatican coinage in 2017.

Each coin is encapsulated and available for purchase at their face value. A presentation case is available and sold as a separate item. Also available are the Proof sets, which include gold or silver commemorative coins with separate themes chosen for 2021.

The 2021-dated mint set issued during the ninth year of the pontificate of Francis, includes a commemorative €5 coin marking the 500th anniversary of the death of Pope Leo X. Born Giovanni di Lorenzo de’ Medici on the 11th December 1475, he became the 217th Pope of the Catholic Church from 1513 to his death on 1st December 1521, he was a highly educated and great humanist belonging to one of the most influential and prominent Florentine families at the time. Complex and turbulent years marked the pontificate of Leo X, as he had to face off with the Lutheran Reformation, which culminated in the excommunication of Martin Luther and the Protestant split in January 1521, just a few months before his death. He was also a great Renaissance Pope who appreciated and supported the work of the artist Raphael, who died in 1520 during his pontificate. During those years, Raphael oversaw a permanent display of his art in the Vatican and created a magnificent portrait of the Pope which is now preserved in the Uffizi Galleries in Florence.

The reverse side of the coin includes an impressive profile portrait of Leo X designed by engraver Marco Ventura and which is inspired by the iconography of the pontiff. Above the portrait of the pontiff is the name of the issuing authority CITTA DEL VATICANO with the coins’ value of CINQUE EVRO placed below the primary design. The obverse side includes both crests of Pope Leo X and of HE Pope Francis depicting the papal mitre and crossed keys. The legend FRANCISCUS PP ANNO DOMINI MMXXI is around the crest.

The 20-euro 2021-dated silver commemorative coin, designed by Gabriele Di Maulo, draws inspiration from Pope Francis’ prayer in St. Peter’s Square to plead for divine help against the pandemic, in front of the San Marcello Crucifix, with the Holy Spirit soaked by the rain that characterized that historic event.

The 50-euro gold coin is designed by Luigi Oldani and depicts elements inspired by a fundamental theme of the pontificate of Francis, namely the respect and care of the Earth, which hosts us along with all other plant and animal species. The reverse side shows a clear reference to the encyclical letter Laudato si’ with plants, animals, and water flowing from a mountain on which stands a cross, a sign of the divine from which everything has its origin and all is created. The message of the encyclical letter is that it is up to us to safeguard and love what God has created.

Each set includes all eight currently circulating and/or authorised denominations within the euro-system from €2 to one-cent pieces and individually encapsulated. Each obverse depicts the coat of arms of Pope Francis, Sovereign of the Vatican City State, the inscription CITTA DEL VATICANO and 12 stars encircling the crest. Both gold and silver version Proof sets are presented in a maroon coloured leather embossed custom case and accompanied by a certificate of authenticity. For more information about these coins and other numismatic products available from the Commercializzazione Filatelica e Numismatica, please click here.

Please note: Due to COVID restrictions online ordering is currently unavailable. Interested collectors may contact  for information on when the service will be reinstated.