For the fourth consecutive year, the United States Mint will not offer American Platinum Eagles in bullion format. As such, the only 2012 Platinum Eagle produced and issued will be the proof version struck for collectors.

Within his opening letter to the US Mint’s 2011 Annual Report, Deputy Directory Richard A. Peterson had raised the possibility of bringing back the platinum bullion offering in 2012. He stated, “We are evaluating, in conjunction with our authorized purchaser distribution channel, the optimum way to bring back American Eagle Platinum Bullion Coins in 2012.” However, it appears that the Mint has decided to forgo the offering for another year. 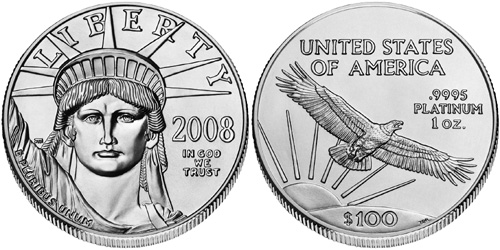 Platinum bullion coins were last available from the US Mint in 2008. That year, the .9995 pure American Platinum Eagles were available in one ounce, one-half ounce, one-quarter ounce, and one-tenth ounce sizes. As with other bullion programs, these coins could be ordered in bulk quantities by authorized purchasers based on the market price of platinum plus a mark up. The authorized purchasers would then resell the coins to other bullion dealers, coin dealers, and/or the general public.

When last available, authorized purchasers were required to order a minimum quantity of 1,000 ounces of platinum. The premiums were 4%, 6%, 10%, and 15% for the one ounce, one-half ounce, one-quarter ounce, and one-tenth ounce coins, respectively.

In late 2008, the US Mint announced the suspension of production of American Platinum Eagle bullion coins to devote additional resources to the production of gold and silver bullion coins. In 2009, production was initially announced as delayed, but eventually canceled. The bullion offering was also canceled for 2010, 2011, and now for 2012. Prior to the string of cancellations, the bullion coins had been issued each year from 1997 to 2008. 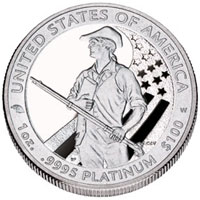 According to a spokesman for the United States Mint no final decision has been made regarding the issuance of American Platinum Eagle bullion coins in 2013 or beyond.

Although the bullion coins have been canceled for the last four years, the US Mint has continued to produce one ounce proof Platinum Eagles for collectors. For each year from 2009 to 2012, a different reverse design has been featured to represent the core concepts of American democracy as found in the Preamble to the Constitution. The issues for 2009, 2010, and 2011 sold out of maximum mintages of 8,000, 10,000, and 15,000 respectively. This year’s coin went on sale August 9, 2012 and has sold 6,545 out of the 15,000 maximum mintage.