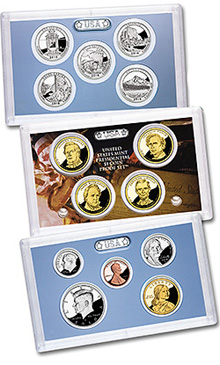 The United States Mint plans to release their most popular core annual products in January 2011. This will include the 2011 Proof Set, 2011 Mint Set, and 2011 Silver Proof Set

Typically the annual sets have been available much later in the year. For 2010, the sets were not released until July and August. The change in scheduling was done in response to customer demand.

“We’ve listened to our customers and their desire to have these annual sets earlier in the year,” said Ed Moy, Director of the United States Mint.  “Making our annual core products available at one time, and early in the year, provides our customers the opportunity to purchase them for their collections and for gift-giving throughout the year.”

Although the 2011 mint sets will be going on sale earlier, the US Mint intends to keep the 2010 Proof Set, 2010 Mint Set, and 2010 Silver Proof Set available for an extended period. Based on a response received from a Mint representative, these products are planned to remain on sale until December 31, 2011.