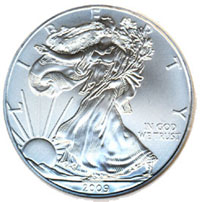 The United States Mint has suspended sales of their popular one ounce American Gold Eagle and one ounce American Silver Eagle bullion coins. The suspension was announced in a memo sent to the US Mint’s authorized bullion purchasers.

The suspension comes during an environment of steadily rising precious metals prices and increased demand for physical gold and silver investments. This month alone, the price of gold and silver have each risen by approximately 12%.

Last year, the US Mint also took measures to deal with increased demand for their bullion coins. Sales Silver Eagles and Gold Eagles were both briefly suspended and then resumed on a rationed basis, which limited bullion coin sales at the authorized purchaser level. Rationing programs were finally lifted in June 2009.