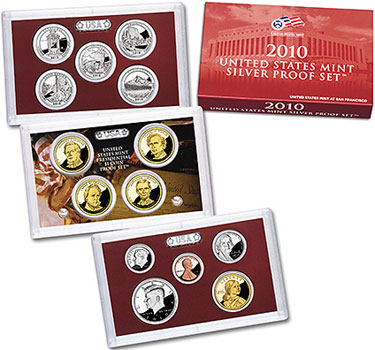 Silver Proof Sets have been issued by the United States Mint each year since 1992. The dime, quarters, and half dollar included in each set are struck in 90% silver and 10% copper, the composition used for these coins before 1965. The remaining coins in the set are struck in their standard, modern-day compositions.

All coins are struck at the San Francisco Mint and carry the “S” mint mark. They are packaged in three protective lenses and placed within an outer cardboard box with a certificate of authenticity signed by the Director of the United States Mint.

The sets are priced at $56.95 plus applicable shipping and handling and may be purchased from the US Mint at http://catalog.usmint.gov.