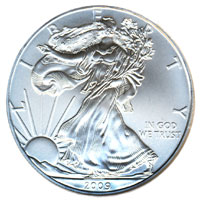 The continuing heavy demand for precious metals has pushed annual sales of the United States Mint’s American Silver Eagle bullion coin to an all time high. The number of one ounce silver coins sold to date already exceeds the previous record level reached in the previous year.

The American Silver Eagle has been issued since 1986 as the official silver bullion coin of the United States. Each coin’s weight, content, and purity are guaranteed by the government. In the time period since the coin’s initial release, more than 190 million coins have been sold. Beginning in 2008, the demand for coins increased dramatically and left the US Mint struggling to keep up.

Last year the US Mint was forced to suspend sales of the Silver Eagle for brief time and then resume sales on an allocated basis. Authorized purchasers, who can order the coins directly from the Mint, were limited in the number of coins they could receive. Despite the suspension and allocations, by the end of the year 19,583,500 coins had been sold. This easily exceeded the previous annual record sales of 10,475,500 coins sold in 2002.

This year, the US Mint has already sold 22,092,500 Silver Eagles to date. With more than two months to go, the total annual sales will likely exceed 25 million coins.

The demand for Silver Eagle bullion coins has had an unfortunate impact on collectors. The United States Mint announced in early October that they would not be producing collectible proof and uncirculated versions of the coins. The proof version has been minted for collectors since the series began in 1986. The uncirculated version has been minted since 2006 when the new collectible version was introduced.