Launch ceremonies have been held at the location depicted or another related area for each release of the America the Beautiful Quarters Program. The events are open to the public and are followed by a coin exchange where attendees can exchange paper currency for rolls of the newly released quarters. Children in attendance at the ceremony are typically given a free coin to commemorate the event. 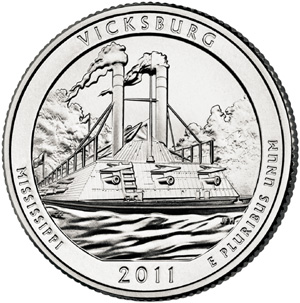 The ceremony for the Vicksburg National Military Park Quarter will be held on Tuesday, August 30, 2011 at 9:30 AM CT. The event will be held at the U.S.S. Cairo Museum located on the grounds of the park. The official circulation release date for the Vicksburg Quarter is one day earlier on August 29, 2011, although the coins have already been issued in some US Mint numismatic products. 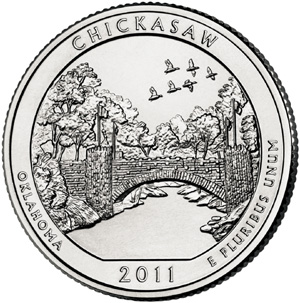 The Chickasaw National Recreation Area Quarter launch ceremony will be held on Wednesday, November 16, 2011 at 11:00 AM CT. The ceremony will take place at The Point at the Lake of the Arbuckles boat launch parking lot in Sulpher, Oklahoma. The circulation release date for the quarters takes place two days earlier on November 14, 2011, although once again the coins have been issued in certain numismatic products.

Update: The location of the Chickasaw Quarter event has been changed.

On the evening before each ceremony, the United States Mint will host a coin forum where the public can discuss and learn about United States Mint coinage and initiatives. Further details on these public forums will be release prior to the events.