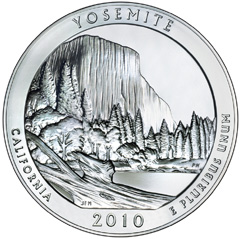 The latest US Mint numismatic product sales report contains some unusual twists. Apparently, the maximum mintage for the Yosemite Five Ounce Silver Coins has not been sold. The pace of sales has declined dramatically for the recently released 2011 Proof Silver Eagles.

The 2010-P Yosemite National Park Five Ounce Silver Uncirculated Coins went on sale at the US Mint on June 9, 2011. Similar to previous numismatic releases for the five ounce silver coin series, the maximum mintage was 27,000 units and a one per household ordering limit was in place. After recording initial sales of 20,511 units by June 12, relatively brisk sales continued until June 23, when the US Mint posted a waiting list notice on the online product page. This notice indicated, “The number of orders we have taken meets the maximum limit for the 2010 America the Beautiful Five Ounce Silver Uncirculated Coin – Yosemite National Park Coin.” It went on to state that orders would still be accepted for placement on a waiting list.

Update: The US Mint has provided the following statement: “The 2010 America the Beautiful Five Ounce Silver Uncirculated Coins — Yosemite National Park are not sold out. Unfortunately, however, a message saying that a waitlist for the coins had been put into place was inadvertently posted to the United States Mint’s online catalog on June 23. As soon as we learned the message had been posted, we removed it. We also lifted the household order limits for these coins the week of July 4. We regret the error on our part and the inconvenience the posting of the waitlist language caused our customers.”

Meanwhile, the subsequent release featuring Grand Canyon National Park has moved up by 1,534 units to a total of 20,834 out of the 27,000 maximum.

The recently released 2011 Proof Silver Eagle moved ahead by 40,368. This is a steep decline from the initial sales of 367,623 indicated in last week’s sales report. Many of the traditional US Mint precious metals numismatic products have experienced slower sales this year compared to last year.

The full US Mint numismatic product sales report appears below. The figures are compiled through July 10, 2011. The first number column represents total sales through the reporting date, and the second number column represents the change in sales since the last report. Products listed in bold are new to this report. Products with sales followed by an asterisk (*) are no longer available from the United States Mint. Currently available US Mint products can be found online at http://catalog.usmint.gov/