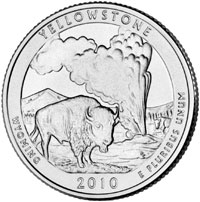 The latest sales report for United States Mint numismatic products includes the debut figures for the Yellowstone National Park Quarter bags and rolls, as well as the new release for the First Spouse Gold Coin series featuring Jane Pierce. Unfortunately, figures for the recently released 2010 Proof Gold Buffalo have not been provided yet.

The US Mint began sales of 100-coin bags and two roll sets for the Yellowstone National Park Quarter on June 1, 2010, as the second release of the America the Beautiful Quarters Program. Through the reporting date of June 6, 2010, the Mint recorded sales of 4,447 of the Philadelphia 100-coin bags, 4,392 of the Denver Mint 100-coin bags, and 23,273 of the two roll sets. These figures come in about 10% lower than the comparable debut sales figures for the Hot Springs Quarter products.

Jane Pierce First Spouse Gold Coins, which went on sale June 3, 2010, saw initial sales figures decline even further compared to the prior release for the series. The US Mint recorded sales of 1,579 proof coins and 855 uncirculated coins. This compares to initial sales of 1,824 proofs and 1,057 uncirculated coins for the Abigail Fillmore coin, which equates to declines of 13.4% and 23.6%. The lower sales may be attributable to the higher initial offering price for the Jane Pierce coins. Note: updated numbers were not provided for the Letitia and Julia Tyler coins, which recently went off-sale at the US Mint.

Combined sales for the Boy Scouts Silver Dollar have now risen to 348,977.  This puts the product within striking distance of the full maximum authorized mintage of 350,000 coins. The US Mint sold out of the uncirculated version of the coin on April 30, 2010, although the proof version has remained available for sale.

The full weekly sales report is shown below. Figures are compiled through June 6, 2010. The first number column indicates total sales through the reporting date and the second number column represents the change in sales since the last report. Figures which are followed by an asterisk (*) are no longer available for sale at the US Mint.