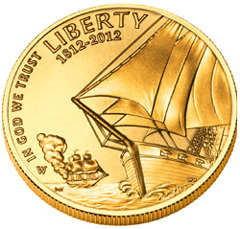 The new weekly report of United States Mint numismatic product sales contains the debut numbers for the 2012 Star Spangled Banner Gold and Silver Commemorative Coins. This is the second of two commemorative coin programs for the year.

Meanwhile, sales of the 2012 Infantry Soldier Silver Dollars continued, this week adding 18,303 individual proofs, 7,187 individual uncirculated coins. The Defenders of Freedom Set, which includes the proof version of the coin along with a replica dog tag and miniature chain, added 7,658 units. This special set has now reached sales of 40,420 out of the maximum product limit of 50,000.

The complete US Mint numismatic product sales report appears below. The figures are compiled through March 12, 2012. The first number column represents total sales through the reporting date, and the second number column represents the change in sales since the last report. Products listed in bold make their debut on this report. Products with sales followed by an asterisk (*) are no longer available from the United States Mint. Currently available US Mint products can be found online athttp://catalog.usmint.gov/