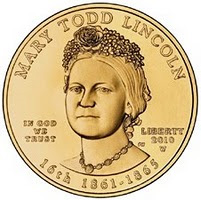 The latest weekly US Mint numismatic product sales report includes the sell out of several different products. One sell out was somewhat unexpected, while the others were planned or anticipated. A dramatic slow down in sales has occurred for the 2011 Proof Platinum Eagle, during the second week of sales.

On June 1, the US Mint removed the 2010-P Yellowstone National Park Five Ounce Silver Coins from availability and marked the product “sold out” on their website. The maximum mintage of 27,000 coins took exactly the same number of days to sell out as the initial release featuring Hot Springs National Park. With another release scheduled to be released in the current week, will collector enthusiasm for the series continue?

Later the same day, the uncirculated version of the Mary Todd Lincoln First Spouse Gold Coin sold out. These coins had initially gone on sale December 2, 2010 and had a maximum mintage of 20,000 across proof and uncirculated versions. With sales far below the maximum, not too many collectors were expecting the sell out. Secondary market prices have already jumped. The proof version of the coin remains available for sale at the Mint.

The third sell out occurred for the Yellowstone National Park Quarter numismatic bags and rolls. At the time of release, the US Mint had indicated that these products would remain available for exactly one year from the initial release date. This time period expired last week.

A slow down occurred for some precious metals related products, particularly the 2011 American Platinum Eagle Proof Coin. After selling 6,786 coins during the debut period, the most recent week’s sales dropped to just 658. Total sales have now risen to 7,444. The 2009 and 2010-dated proof platinum offerings had each sold out of their maximum mintages of 8,000 and 10,000 after only seven days. This year, the US Mint boosted the maximum mintage to 15,000.

The full US Mint numismatic product sales report appears below. The figures are compiled through June 5, 2011. The first number column represents total sales through the reporting date, and the second number column represents the change in sales since the last report. Products with sales followed by an asterisk (*) are no longer available from the United States Mint. Currently available US Mint products can be found online at http://catalog.usmint.gov/