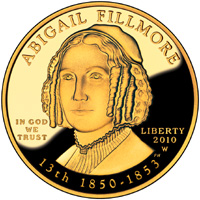 The latest weekly sales report of United States Mint numismatic products, shows smaller than typical increases for most product types. With the new year underway, collectors may be waiting for product releases containing 2011 coins. Also, many of the more popular 2010 releases have sold out in recent weeks, leaving fewer options to choose from.

One of the stronger sales areas for the week was for the US Mint’s First Spouse Gold Coins. Across the four different designs available in proof and uncirculated versions, the US Mint sold 601 coins. The highest sales were recorded for the Abigail Fillmore coins with 200 proofs and 10 uncirculated coins sold. These coins are only expected to remain available for sale until March 3.

The closely watched 2010 Proof Silver Eagle had sales adjusted to 860,000. This coin had sold out on December 28, 2010, but the sales figures have continued to fluctuate in the past two weeks.

Annual sets experienced lower sales than usual with the 2010 Proof Set adding 6,257, the 2010 Silver Proof Set adding 5,007, and the 2010 Uncirculated Mint Set adding 3,572. As mentioned, collectors may be holding back ahead of the release of the newer versions of the sets released in January and February. The 2011 Proof Set just went on sale today.

The complete US Mint numismatic product sales report appears below. Figures are compiled as of January 9, 2011. The first number column represents total sales through the reporting date, and the second number column represents the change in sales since the last report. Figures which are followed by an asterisk (*) are no longer available for sale from the United States Mint. Lines appearing in bold are for products which debuted on this report. Available US Mint products can be found online at http://catalog.usmint.gov/