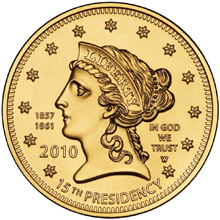 The initial sales figures for the 2011 America the Beautiful Quarters Proof Set are available within this week’s US Mint numismatic product report. Another highlight is the surge in sales for the James Buchanan’s Liberty Gold Coins, which seem close to a sell out.

The US Mint began sales of the 5-coin proof set including each of this year’s quarters on March 17, 2011. As a change from previous years, this separate set was offered following the release of the complete 2011 Proof Set. Typically, part of the benefit of buying the separate coin sets is the ability to get the coins earlier.

Sales of the 2011 America the Beautiful Quarters Proof Set reached 53,944 through March 20. This is a significant drop from the debut sales for the 2010-dated set, which sold 75,558 within a comparable period. Releasing the full annual coin sets before the separate sets has been a boon for collectors, but it seems to be impacting the US Mint’s sales.

The uncirculated version of the James Buchanan’s Liberty First Spouse Gold Coin added sales of 493 in the latest week. Across proof and unciculated versions, sales have now reached 12,883. When the proof version of the coin unexpectedly sold out, the US Mint indicated that they had only struck 13,000 coins across both versions based on demand forecasts.

The complete US Mint numismatic product sales report appears below. The figures are compiled through March 20, 2011. The first number column represents total sales through the reporting date, and the second number column represents the change in sales since the last report. Lines which appear in bold represent products which have debuted on this report. Figures which are followed by an asterisk (*) are no longer available for sale from the United States Mint. Currently available US Mint products can be found online at http://catalog.usmint.gov/