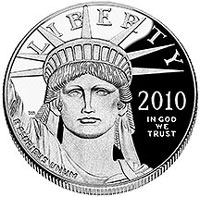 The latest weekly report for the United States Mint numismatic product sales is available. The report includes the 2010 Proof Platinum Eagle, which has already sold out, and the debut sales figures for the James Buchanan Presidential Dollar rolls.

When the 2010 Platinum Eagle Proof Coin made its first appearance on the sales report last week, it had already sold 8,268 coins. These opening sales were achieved between the product release date on August 12 and the sales reporting date on August 15. By late morning on August 19, sales attained the 10,000 coin maximum and the US Mint ended regular sales and opened a waiting list.

The waiting list option was removed yesterday, making the sell out official. Despite the fact that the maximum mintage was 25% higher and the initial cost was $100 greater, this year’s collectible Platinum Eagle offering sold out faster than the 2009 Proof Platinum Eagle.

Sales of the James Buchanan Presidential Dollar 25-coin numismatic rolls began at the US Mint on August 19, 2010 to coincide with the circulation release date. So far sales have reached 22,929 Philadelphia Mint rolls and 23,167 Denver Mint rolls. These initial sales represent a decline of about 1,000 rolls per mint as compared to the debut figures for the prior coin featuring Franklin Pierce. This continues the pattern of waning sales for this product type.

Annual set sales enjoyed a rebound this week, after the unusually low levels experienced last week. The 2010 Proof Set added 30,669 units to bring the total to 426,314, and the 2010 Mint Set added 19,981 to bring the total to 303,095. This suggests that last week’s dip was related to order cancellations, returns, or other adjustments, rather than a significant decline in sales.

The complete report of US Mint numismatic product sales appears below. These figures are compiled through August 22, 2010. The first number column represents total sales through the reporting date and the second number column represents the change in sales since the last report. Figures which are followed by an asterisk (*) are no longer available for sale at the US Mint.