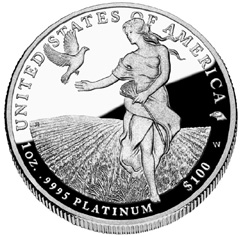 Another high profile US Mint numismatic product makes its debut in the latest weekly sales report. Meanwhile, sales of recently released gold coin products showed resilient sales, perhaps benefiting from orders placed ahead of a pricing increase implemented in the middle of the reporting period.

The United States Mint began sales of the 2011 Proof Platinum Eagles on May 26, 2011. Available in only one ounce size, the coins were priced at $2,082 each and limited to a maximum mintage of 15,000. Through the reporting date of May 29, sales had reached 6,786 units. This was a faster start than the 2011 Proof Gold Buffalo, which debuted in the prior week. However, the initial sales were below the levels experienced for the prior two annual platinum releases, which had opened strong and quickly sold out.

After selling 490 units in the previous period, the 2011-W Uncirculated Gold Eagle added another 435 units in the latest week. Total sales have now reached 2,260. The collectible uncirculated version of the American Gold Eagle made its return this year, following a two year hiatus.

Note: Figures were not provided for the recently released 2010-P Yellowstone National Park Five Ounce Silver Uncirculated Coin. If updated sales figures are provided, they will be posted here. As of May 22, sales had reached 24,626 out of the 27,000 maximum mintage. At this time, the product still remains available for sale on the US Mint’s website.

The full US Mint numismatic product sales report appears below. The figures are compiled through May 29, 2011. The first number column represents total sales through the reporting date, and the second number column represents the change in sales since the last report. Products which make their debut on this report appear in bold. Products with sales followed by an asterisk (*) are no longer available from the United States Mint. Currently available US Mint products can be found online at http://catalog.usmint.gov/