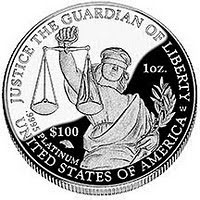 The latest weekly US Mint numismatic product sales report includes the debut figures for the 2010 American Platinum Eagle Proof Coin.The strong initial sales suggest that a sell out for the one ounce platinum coin is imminent.

The 2010 Proof Platinum Eagle went on sale at the US Mint on August 12, 2010. The coins feature a reverse design representing the theme “To Establish Justice”, continuing the design series for the core concepts of American democracy. Priced at $1,892 each, the product represents the most expensive US Mint product for the year to date. Through August 15, 2010, the US Mint recorded sales of 8,268 coins out of the maximum authorized mintage of 10,000. This exceeds the debut sales figures for last year’s one ounce proof platinum coin offering, which sold 7,207 coins in the opening days, before selling out of the maximum 8,000 mintage soon thereafter.

Other products of note from this report include the 2010 Proof Gold Buffalo, which sold 689 to bring the total sales to date above the 25,000 level. Sales of the First Spouse Coins cooled following negative adjustments for the Abigail Fillmore First Spouse Gold Coins. The highest sellers were once again the most recently released coins featuring Jane Pierce.

The full US Mint sales report for numismatic products appears below. Figures are compiled through August 15, 2010. The first number column indicates total sales through the reporting date and the second number column represents the change since the last report. Figures which are followed by an asterisk (*) are no longer available for sale at the US Mint.