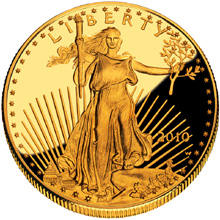 This week’s report of the United States Mint’s numismatic product sales includes the opening figures for the 2010 American Gold Eagle Proof Coins. After the cancellation of last year’s collector offerings for the series, buyers were out in force for the newly released coins.

Cumulative sales for the 2010 Proof Gold Eagles across all options totaled more than $47 million. I believe this is the highest debut sales for a US Mint product since the 2009 Ultra High Relief Double Eagle, which had netted around the same amount during the debut sales period. Although in fairness, the UHR Double Eagle carried a one per household ordering limit and only included one option, while the proof Gold Eagles have no ordering limits and are offered across multiple individual and set options.

After only a few days of sales, there are already some sizable dents in the product limits established by the United States Mint, particularly for the individual one ounce option which has sold more than half of the maximum. The table below shows the 2010 Proof Gold Eagle product sales, the product limit, and the percentage of the limit already attained.

In all likelihood, product sales will experience a slowdown in subsequent weeks, but the strong opening is a taste of what will be in store when the US Mint releases the 2010 Proof Silver Eagle on November 19, 2010.

The complete report of US Mint numismatic product sales appears below. Figures are compiled as of October 10, 2010. The first number column represents total sales through the reporting date, and the second  number column represents the change in sales since the last report.  Figures which are followed by an asterisk (*) are no longer available  for sale from the United States Mint. Other products can be found at http://catalog.usmint.gov/