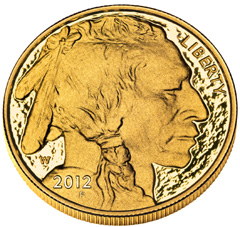 The US Mint began accepting orders for the 2012 Proof Gold Buffalo on March 15, 2012. The coins were priced at $1,960 each, reflecting the average weekly market price of gold. Each coin contains one troy ounce of (.9999) 24 karat gold and bears the classic 1913 Type 1 Buffalo Nickel design from James Earle Fraser. Through the sales reporting date of March 19, 2012, the US Mint has recorded sales of 4,110 coins.

Sales of the US Mint’s 2012 Birth Set began on March 13, 2012. This product contains five proof coins and is created as a special gift for newborns. It actually represents the first availability for the 2012-S Proof Kennedy Half Dollar, Roosevelt Dime, Jefferson Nickel, and Lincoln Cent, prompting coin grading company NGC to offer a special pedigree and designation for coins included in the set. Within the opening sales period, the 2012 Birth Set recorded sales of 5,670 units.

Recently released 2012 commemorative coin saw their sales velocity slow compared to the previous week. The 2012 Infantry Soldier Silver Dollar added 11,991 coins across all product options. The 2012 Star Spangled Banner Coins saw sales of 941 of the $5 gold coins, 20,960 of the silver dollars, and 890 of the two coin proof sets.

The full US Mint numismatic product sales report appears below. The figures are compiled through March 19, 2012. The first number column represents total sales through the reporting date, and the second number column represents the change in sales since the last report. Products listed in bold make their debut on this report. Products with sales followed by an asterisk (*) are no longer available from the United States Mint. Currently available US Mint products can be found online athttp://catalog.usmint.gov/