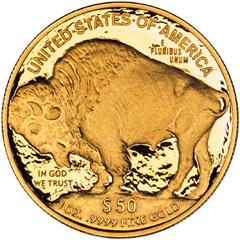 Several US Mint numismatic products make their debut appearance on the latest weekly sales report. For many collectors the most closely watched figures will be for the 2011 Proof Gold Buffalo and the 2010-P Yellowstone National Park Five Ounce Silver Uncirculated Coin.

Following the recent sell out of the 2010-dated coin, the US Mint began sales of the 2011 Proof Gold Buffalo on May 19, 2011. The initial price was $1,760 for each one ounce coin, with no stated maximum mintage or household limits in place. Through the sales reporting date of May 22, 2011, the the US Mint recorded sales of 5,782 coins. This is a sharp decline from the initial burst of sales experienced for the two prior years of the offering. The 2009-dated coin had sold 19,468 and the 2009-dated coin had sold 12,778 in the first three days of availability.

As previously reported, the Yellowstone Five Ounce Uncirculated Silver Coin had sold 18,143 units by the end of the first day of availability on May 17. Through May 22, sales have now reached 24,626 out of the 27,000 mintage. The first numismatic release of the America the Beautiful Five Ounce Silver Coin had taken approximately two weeks to sell 27,000 coins. Will the latest release achieve a sell out in less time?

Also debuting on this week’s report are the Ulysses S. Grant Presidential Dollar numismatic rolls. Sales reached 20,174 for the Philadelphia Mint rolls and 19,945 for the Denver Mint rolls. This sets a slower pace than the previously released rolls featuring Andrew Johnson, which had sold 23,211 and 22,523, respectively, at their debut.

The full US Mint numismatic product sales report appears below. The figures are compiled through May 22, 2011. The first number column represents total sales through the reporting date, and the second number column represents the change in sales since the last report. Products which make their debut on this report appear in bold. Products with sales followed by an asterisk (*) are no longer available from the United States Mint. Currently available US Mint products can be found online at http://catalog.usmint.gov/