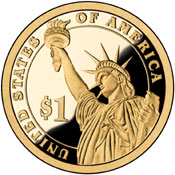 The latest sales report of the United States Mint’s numismatic products comes two weeks after the previous report. A report was not generated last week since federal agencies in the Washington DC area were closed for an extended period due to weather. Accordingly, the sales increases mentioned in this week’s report will represent the past two week’s worth of sales.

With the price of gold regaining some stability and moving sharply higher, the sales for the US Mint’s gold coins have seen a boost. The 2009 Proof Gold Buffalo added 1,327 to bring the total to 46,828. The 2009 First Spouse Gold Coins saw 943 coins sold across all options. Some big increases took place for the uncirculated versions of some coins. Buyers may be focusing on these rather than the proof coins, since they usually end up with lower mintages.

More 2010-dated products are finding their way onto the report. Joining the 2010 Native American Dollar Rolls and 2010 Kennedy Half Dollar Bags and Rolls is the 2010 Presidential Dollar Proof Set. Since going on sale February 11, 2010, the set has sold 224,426 units. This represents an extremely strong start, as last year’s set sold only 82,168 for its debut sales period. Collectors are likely anxious to get their first glimpse of the Abraham Lincoln Presidential Dollar.