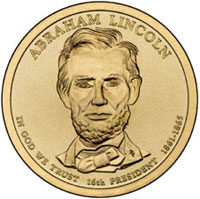 The opening sales figures for the 2010 Presidential Dollar Uncirculated Set are available as part of this week’s US Mint sales report. Other highlights include updated sales figures for the recently issued 2010 Lincoln Cent Two Roll Set and the two commemorative coin programs for this year.

The 2010 Presidential Dollar Uncirculated Set went on sale at the US Mint on April 13, 2010. This product includes satin finish versions of the 2010 Presidential Dollars featuring Millard Fillmore, Franklin Pierce, James Buchanan, and Abraham Lincoln. Through the sales reporting date of April 18, 2010, the US Mint has sold 23,962 units. When last year’s similar set was issued, the debut sales figures were only 12,780, illustrating the stronger demand for this year’s offering.

Some of the most closely watched sales numbers from recent reports have been for the 2010 commemorative coin programs. Both of this year’s offerings started with strong opening sales figures, which suggested possible or likely sell outs of the 350,000 maximum authorized mintages. However, the pace of sales slowed after the rush of initial orders. This week, the 2010 American Veterans Disabled for Life Silver Dollars added sales of 2,284, bringing the total sales to 193,773, and the 2010 Boy Scouts Silver Dollars added sales of 22,261, bringing total sales to 312,653.

The full weekly sales report follows. Figures are compiled through April 18, 2010. The first number column indicates total sales through the reporting date and the second number column represents the change in sales since the last report. Figures which are followed by an asterisk (*) are no longer available for sale at the US Mint.